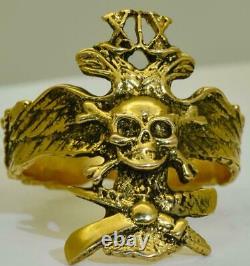 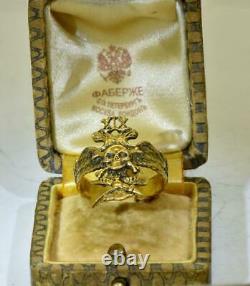 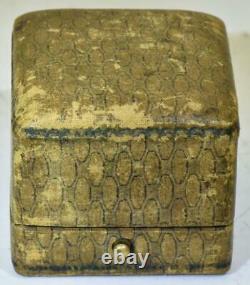 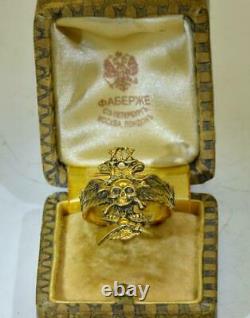 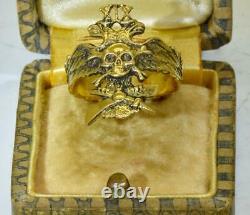 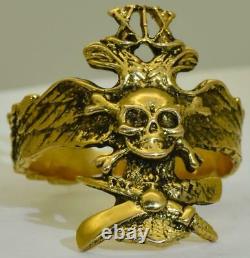 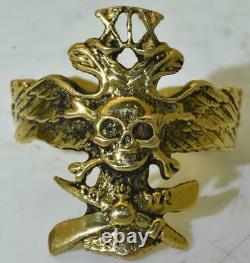 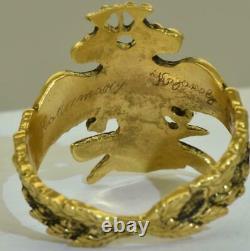 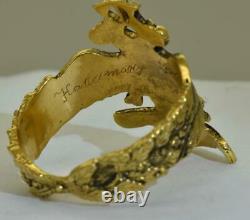 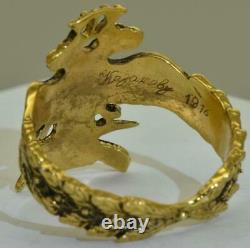 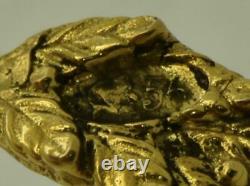 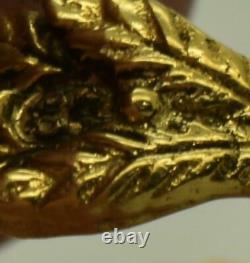 The ring has been awarded to Captain Kozakov from 19th Fighter avio Detachment "Death or Glory". The ring represent the official emblem of the 19th avio Detachement-a skull, bones, sword and propeller in the middle of the Imperial Russian double headed eagle.

On the top is depicted XIX Roman number(for 19th Detachement). The ring is made by Faberge's head workmaster Oscar Pihl (hallmarked with his initials OP and with 56 Kokoshnik hallmark for 14k gold) The ring is size 9.5 6.6g heavy. The ring is engraved in Russian "To kaptain Kozakov, 1916" (Kapitanu Kozakovu, 1916). The ring comes with the original presentation box signed in Russian Faberge, St. History: In the First World War, men painted symbols on their aircraft as a talisman, or as a warning to the enemy, and what better icon to use threatening death and destruction than a skull and crossbones. It was employed by almost every warring nation's pilots: Germany's Lt. Georg Hantelmann, France's Capt. Charles Nungesser, England's Capt. Pratt of 46 Squadron, Italy's Capt.

Fulco Ruffo di Calabria, Austria's Deputy Officer Julius Arigi, and by the men of Russia's 19th Fighter Detachment, (usually written as XIX Detachment). While many pilots used the macabre design individually, it was the Russian "Death or Glory" 19th Corp Air Squadron that utilized it for the entire unit, proudly painting it on the rudder or tail surfaces of their aircraft. Death or Glory was not an empty phrase to them. The unit included a number of Russia's highest scoring aces. When the war started in August 1914, the 19th Detachment was based at Warsaw as part of the Second Aviation Company.

Starting on October 1, 1915, command of the Detachment was given to the man who would become the Imperial Russian Air Service's most successful pilot, Cavalry Staff Captain Alexander A. Kozakov (sometimes spelled as Kazakov). His squadron was initially equipped with outmoded and unarmed Morane Gs, Morane-Saulnier Ls, and Farman and Voisin pushers. But by the end of the month Kozakov had managed to procure a Nieuport 10 single seater with which to face the enemy on more even terms. The method of arming it with a machine gun proved difficult as, at the time, Russia did not have an effective interrupter gear.

So the Nieuport had the weapon angled up at 24 degrees to fire over the propeller and with this arrangement, starting in February 1916, Kozakov sought out combat. It finally proved itself in Kozakov's hands that summer and more of the Nieuports were equipped in the same manner. 2s, and supplemented with Russian-made Nieuports from the DUX works. Looking to establish a reputation within the First Air Combat Group, the 19th began painting white skull and crossbones on their black-colored rudders. So that the unit's pilots could identify his machines in the air, Kozakov reversed the scheme on his rudder, painting a black skull and bones on a white rudder. By February 1917, the 19th Detachment had been moved along with the rest of the Air Group near to the Romanian front, and were re-equipped with newer French-made Nieuport 17s and 21s, Morane-Saulnier type "I"s, and the superlative SPAD 7. The Detachment fought on this front until November 1917 when the Russian armies fell apart and demands for an armistice were raised. Besides Kozakov with 20 victories (some sources state the number as 17, but there are indications he may have scored over 30), other pilots who became aces, or enhanced their fame include Pavel Argeyev with 9 (he had previously served on the western front in the French Air Service and scored 6 there, bringing his total to 15), Ivan Smirnov with 11 (some sources say 12), and Ernst Leman with 5. NOTE:PLEASE OBSERVE CAREFULLY THE PHOTOS! IT IS A SIGNIFICANT PART OF THE DESCRIPTION.

Every potencial defect which is shown in the photos, but not mention in the description, will be considered for described. All the photos shoot by professional Nikon 105 Macro lens under 40x diopter magnification, so you can explore even the smallest detail like under microscope!

In the First World War, men painted symbols on their aircraft as a talisman, or as a warning to the enemy, and what better icon to use threatening death and destruction than a skull and crossbones. Death or Glory was not an empty phrase to the. This item is in the category "Jewellery & Watches\Vintage & Antique Jewellery\Rings". The seller is "riaerica2000" and is located in this country: BG.