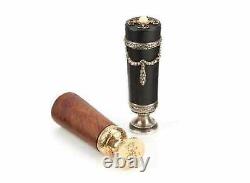 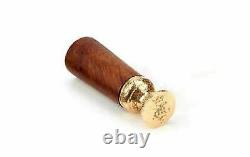 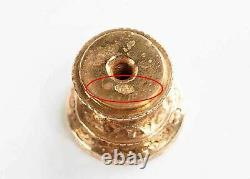 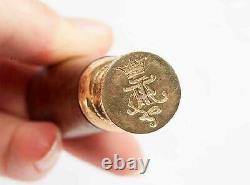 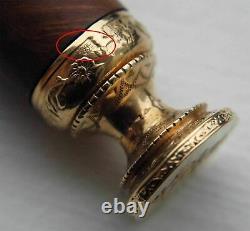 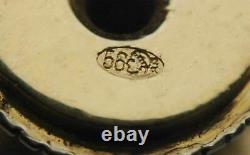 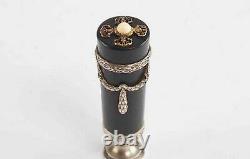 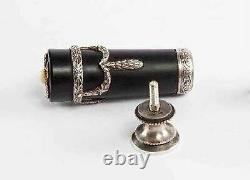 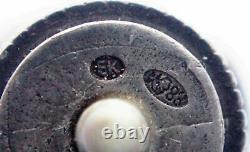 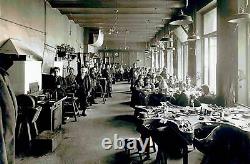 Rare FABERGE - Two Russian Imperial GOLD and Silver Seals. A nice example with gold mounts and engraved seal with crown. Together with an ebonized example accented with silver. Marks: 56 for gold, 88 for silver, EK for Erik August Kollin - workmaster in Faberge shop.

Size : 7.5 cm (3 inches). Please don't hesitate make us an offer. PAY in PARTS : You can pay for any item during 2 - 3 months. Just make a deposit 10% and the item will wait for you. WORKMASTER : Erik August Kollin (18361901) was born in Finland, where he completed his apprenticeship before travelling to St.

Qualified as workmaster in 1868, in 1870 opened his own workshop in St. Kollin worked for August Holmstrom and for Carl Faberge, and was soon put in charge of all Faberge workshops, a post he held until 1886 when he was replaced by Michael Perkhin. He was Faberge's first chief jeweler.

Specialized in gold and silver articles, most of them in an archaic style of the period. The artefacts produced Kollin for Faberge before his departure in 1886 generally bears his initials EK, together with Faberge's hallmark and are frequently to be found in a Faberge box. Evidently these pre-date the change of hallmarks in 1899. WIKIPEDIA : Peter Carl Faberge, also known as Karl Gustavovich Faberge was a Russian jeweller best known for the famous Faberge eggs made in the style of genuine Easter eggs, but using precious metals and gemstones rather than more mundane materials. He's the founder of the famous jewelry legacy House of Faberge.

The House of Faberge is a jewelry firm founded in 1842 in St. Petersburg, Imperial Russia, by Gustav Faberge, using the accented name Faberge, Gustav's sons Peter Carl Faberge and Agathon Faberge, and grandsons followed him in running the business until it was nationalised by the Bolsheviks in 1918.

The firm was famous for designing elaborate jewel-encrusted Faberge eggs for the Russian Tsars and a range of other work of high quality and intricate detail. Which changed its name to Rayette-Faberge Inc. The item "TWO RUSSIAN IMPERIAL GOLD & SILVER SEALS, MARKED EK ERIK AUGUST KOLLIN" is in sale since Wednesday, November 13, 2019.