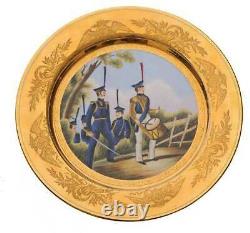 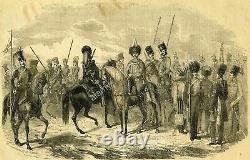 RARE RUSSIAN IMPERIAL LARGE PORCELAIN MILITARY DISH, MEISSEN. Polychromatic decoration in medallion with Russian military characters: "foot soldiers in operation". The borders with gilt pattern, Imperial eagle and trophies motif on border. Blue crossed swords on the back, a Meissen work in the style of the Imperial porcelain manufactory of St.

Petersburg, work of the end of the 19th Century. LARGE SIZE : diameter 30 cm. It is a great INVESTMENT.

PAY in PARTS : You can pay for any item during 2 - 3 months. Just make a deposit 10% and the item will wait for you. WIKIPEDIA : The Imperial Russian Army was the land armed force of the Russian Empire, active from around 1721 to the Russian Revolution of 1917. In the early 1850s, the Russian army consisted of more than 900,000 regular soldiers and nearly 250,000 irregulars (mostly Cossacks).

The last living veteran of the Russian Imperial Army was Ukrainian supercentenarian Mikhail Krichevsky, who died in 2008. WIKIPEDIA : Meissen porcelain or Meissen china was the first European hard-paste porcelain. It was developed starting in 1708 by Ehrenfried Walther von Tschirnhaus. After his death that October, Johann Friedrich Bottger continued von Tschirnhaus's work and brought porcelain to the market.

The production of porcelain at Meissen, near Dresden, started in 1710 and attracted artists and artisans to establish one of the most famous porcelain manufacturers known throughout the world. Its signature logo, the crossed swords, was introduced in 1720 to protect its production; the mark of the swords is one of the oldest trademarks in existence. Meissen remained the dominant European porcelain factory, and the leader of stylistic innovation, until somewhat overtaken by the new styles introduced by the French Sevres factory in the 1760s, but has remained a leading factory to the present day.

Among the developments pioneered by Meissen are the small porcelain figure, and the introduction of European decorative styles to replace the imitation of Asian decoration of its earliest wares. The item "RUSSIAN IMPERIAL PORCELAIN MILITARY DISH, MEISSEN" is in sale since Sunday, October 13, 2019. This item is in the category "Antiques\Silver\Non-U.