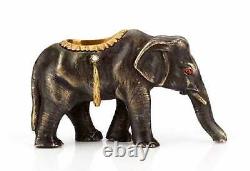 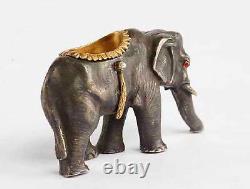 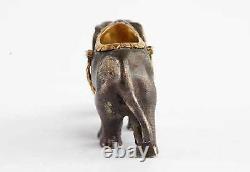 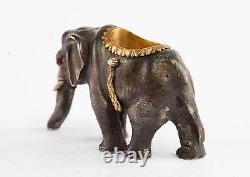 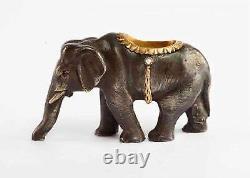 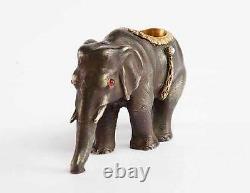 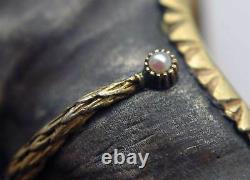 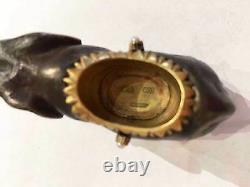 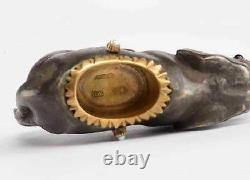 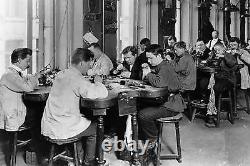 Rare FABERGE - Russian Imperial Silver and GOLD Jewelled Elephant Form Pincushion. Figural pincushion of a standing elephant with gilt accents and jewelling. Faberge marks: FABERGE, 88 for silver, H. For workmaster in Faberge shop - Henrik Immanuel Wigstrom. 7.5 cm (2 7/8 inches). Please note: last image is for sample only. Please don't hesitate make us an offer. Perchin was the head workmaster from 1886 until his death in 1903, when he was succeeded by his chief assistant Henrik Wigstrom. These two workmasters were responsible for almost all the imperial Easter eggs.

Erik August Kollin, a Finn, was head work master from 1870 to 1886 and produced gold jewellery, including pieces in the Scythian style (the Scythian treasure had just been discovered at Kerch in the Crimea). August Wilhelm Holmstrom (who had been appointed head jeweller by Gustav Faberge in 1857) was born in Ekenas, Finland.

Petersburg, as at one time he had had a workshop there. Once in Madsen's employment, his master's trade with Russia, as well as his numerous business contacts here, brought him to work in St. It is unknown who employed Wigstrom on his arrival in the capital, but Wigstrom became assistant in 1884, at the age of 22, to Perchin, whose shop at that time was already working exclusively for Faberge. Wigstrom became head workmaster at Faberge after Perchin's death in 1903. The number of craftsmen in Wigstrom's workshop diminished drastically with the outbreak of World War I. By 1918, the Revolution forced the complete closing of the House of Faberge.

Aged 56, Wigstrom retreated almost empty-handed to his summer house, on Finnish territory, and died there in 1923. His art is similar to Perchin's but tends to be in the Louis XVI, Empire, or neo-classical style. Nearly all the Faberge hardstone animals, figures and flowers from that time period were produced under his supervision. WIKIPEDIA : Peter Carl Faberge, also known as Karl Gustavovich Faberge was a Russian jeweller best known for the famous Faberge eggs made in the style of genuine Easter eggs, but using precious metals and gemstones rather than more mundane materials. He's the founder of the famous jewelry legacy House of Faberge.

The House of Faberge is a jewelry firm founded in 1842 in St. Petersburg, Imperial Russia, by Gustav Faberge, using the accented name Faberge, Gustav's sons Peter Carl Faberge and Agathon Faberge, and grandsons followed him in running the business until it was nationalised by the Bolsheviks in 1918. The firm was famous for designing elaborate jewel-encrusted Faberge eggs for the Russian Tsars and a range of other work of high quality and intricate detail. Which changed its name to Rayette-Faberge Inc. The item "RUSSIAN IMPERIAL GOLD & SILVER ELEPHANT, H. Henrik Wigstrom" is in sale since Tuesday, December 25, 2018. This item is in the category "Antiques\Silver\Non-U. The seller is "ww2_army" and is located in Blaine, Washington. This item can be shipped worldwide.