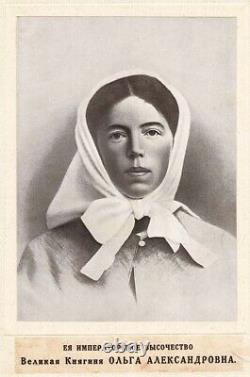 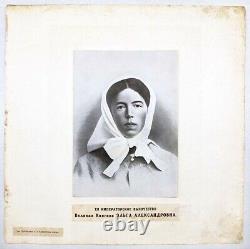 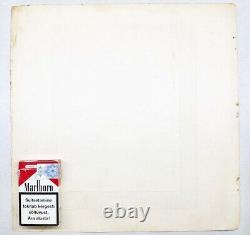 Reign of Tsar Nicholas II 1894 - 1917 Printed Matter. The World War I 1914 - 1918 Vintage Poster 330 x 325 mm. Her Imperial Highness Grand Duchess Olga Alexandrovna in a Headscarf of a Nurse of the Russian Red Cross. Edition of the Association of Printing House A. Poster (photo-type) on thick thin cardboard. Cardboard size 330 x 325 mm. The size of the photo-type (picture) is 140 x 195 cm. The original poster, which was printed 105 years ago. Fine condition, fox spots and dirt on the white field of cardboard, traces of time (see pictures).

At the time of her death. She remained the last Great Princess of the Romanovs. She grew up in the Gatchina Palace in the suburbs of St. Relations with her mother, Empress Maria Fedorovna, were cold. In 1901 she married the Duke of Oldenburg.

The marriage was unsuccessful and ended in divorce in 1915. After the February Revolution, she left for Crimea with her mother and husband, where they lived in conditions close to house arrest. Her brothers Nikolai with his family and Mikhail were killed by the revolutionary authorities. In 1925, in Berlin, she met with the most famous.

False Anastasia - Anna Anderson. One of the few members of the Imperial family who survived the October Revolution; lived in Denmark, then Canada, survived all the other children. Like her father, she preferred a simple life. Over her life, she painted more than 2000 paintings, the proceeds of the sale of which.

Allowed her to support her family and engage in charity work. She died at the age of 78, seven months after the death of her elder sister Ksenia Alexandrovna. This item is in the category "Collectibles\Historical Memorabilia\Royalty Collectibles".

The seller is "smart-collect" and is located in this country: EE. This item can be shipped worldwide.