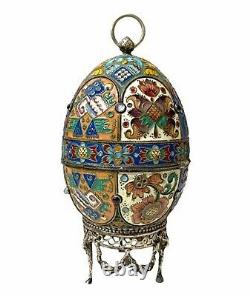 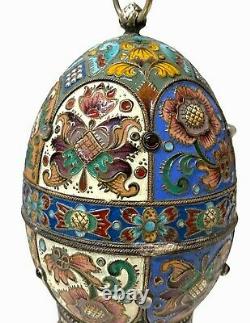 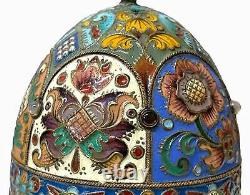 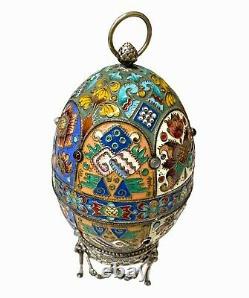 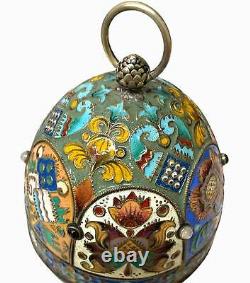 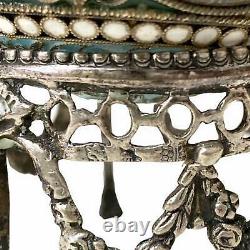 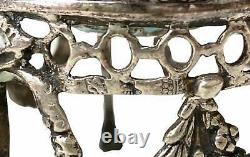 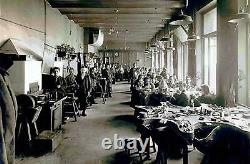 RARE RUSSIAN IMPERIAL SILVER and ENAMEL LARGE EGG. A Russian gilt-silver enamelled egg ovoid in two halves on a three-legged stand. 13 cm (5 1/8 inches), diameter 7 cm. CONDITION : The item is described to the best of our knowledge.

PAY in PARTS : You can pay for any item during 2-3 months. Just make a deposit 10% and the item will wait for you. WIKIPEDIA : A Faberge egg is a jewelled egg (possibly numbering as many as 69, of which 57 survive today) created by the House of Faberge, in St. Virtually all were manufactured under the supervision of Peter Carl Faberge between 1885 and 1917, the most famous being the 50 "Imperial" eggs, 43 of which survive, made for the Russian Tsars Alexander III and Nicholas II as Easter gifts for their wives and mothers. The first Faberge egg was crafted for Tsar Alexander III, who had decided to give his wife, the Empress Maria Feodorovna, an Easter egg in 1885, possibly to celebrate the 20th anniversary of their betrothal.

Although there is no official record of the Tsar's inspiration for it, many believe that he was moved by an egg owned by the Empress's aunt, Princess Vilhelmine Marie of Denmark, which had captivated Maria's imagination in her childhood and of which the Tsar was well aware. Known as the Hen Egg, the very first Faberge egg is crafted from a foundation of gold. Its opaque white enamelled "shell" opens to reveal a matte yellow-gold yolk. This in turn opens to reveal a multicolored gold hen that also opens. The hen contained a minute diamond replica of the imperial crown from which a small ruby pendant was suspended, but these last two elements have been lost.

After Alexander III's death on 1 November 1894, his son, Nicholas II, presented a Faberge egg to both his wife, Alexandra Fedorovna, and his mother, the Dowager Empress Maria Fedorovna. Records have shown that of the 50 imperial Easter eggs, 20 were given to the former and 30 to the latter. Eggs were made each year except 1904 and 1905, during the Russo-Japanese War. The imperial eggs enjoyed great fame, and Faberge was commissioned to make similar eggs for a few private clients, including the Duchess of Marlborough, the Rothschild family and the Yusupovs.

Faberge was also commissioned to make twelve eggs for the industrialist Alexander Kelch, though only seven appear to have been completed. Following the revolution and the nationalization of the Faberge workshop in St. Petersburg by the bolsheviks in 1918, the Faberge family left Russia. The item "RARE RUSSIAN IMPERIAL SILVER and ENAMEL LARGE EGG" is in sale since Monday, January 18, 2021.