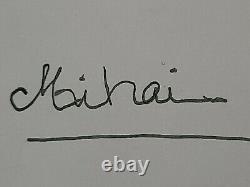 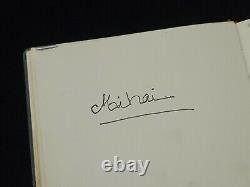 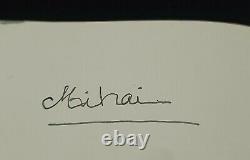 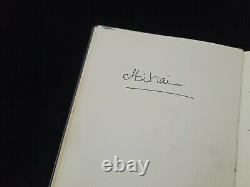 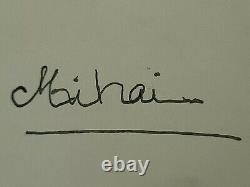 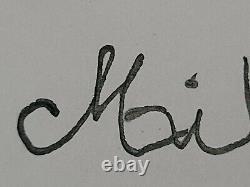 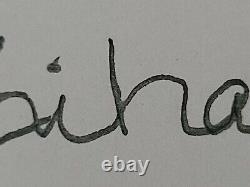 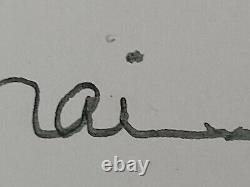 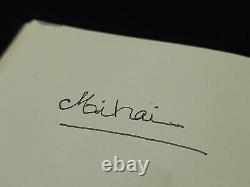 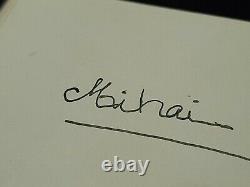 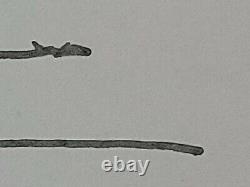 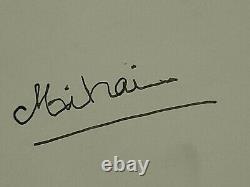 For your consideration is an exceedingly rare and historically important c. 1928 antique Russian Royal family album autograph page, hand-signed Rare by HM King Michael I of Romania as Prince Michael, at the young age of seven. This is a very rare example of his autograph given his age. Minor water stain to lower left hand corner, as pictured. Album page measures approximately 5.5" x 6.5". Page will be carefully removed from the album. Michael I (Romanian: Mihai I [mi'haj]; 25 October 1921 - 5 December 2017) was the last King of Romania, reigning from 20 July 1927 to 8 June 1930 and again from 6 September 1940 until his forced abdication on 30 December 1947. Shortly after Michael's birth, his father, Crown Prince Carol of Romania, had become involved in a controversial relationship with Magda Lupescu. In 1925, Carol was pressured to renounce his rights to the throne and moved to Paris in exile with Lupescu. In 1927, Michael ascended the throne, following the death of his grandfather King Ferdinand I. As Michael was still a minor, a regency council was instituted, composed of his uncle Prince Nicolae, Patriarch Miron Cristea and the president of the Supreme Court, Gheorghe Buzdugan. Carol II was forced to abdicate in 1940, and Michael once again became king. Under the government led by the military dictator Ion Antonescu, Romania became aligned with Nazi Germany. In 1944, Michael participated in a coup against Antonescu, appointed Constantin Sanatescu as his replacement, and subsequently declared an alliance with the Allies.

In March 1945, political pressures forced Michael to appoint a pro-Soviet government headed by Petru Groza. From August 1945 to January 1946, Michael went on a "royal strike" and unsuccessfully tried to oppose Groza's Communist-controlled government by refusing to sign and endorse its decrees. In November 1947, Michael attended the wedding of his cousins, the future Queen Elizabeth II of the United Kingdom and Prince Philip of Greece and Denmark in London.

Shortly thereafter, on the morning of 30 December 1947, Groza met with Michael and compelled him to abdicate. Michael was forced into exile, his properties confiscated, and his citizenship stripped. In 1948, he married Princess Anne of Bourbon-Parma (thenceforth known as Queen Anne of Romania), with whom he had five daughters, and the couple eventually settled in Switzerland. Escu's communist dictatorship was overthrown in 1989 and the following year Michael attempted to return to Romania, only to be arrested and forced to leave upon arrival. In 1992, Michael was allowed to visit Romania for Easter, where he was greeted by huge crowds; a speech he gave from his hotel window drew an estimated one million people to Bucharest.

Alarmed by Michael's popularity, the post-communist government of Ion Iliescu refused to allow him any further visits. In 1997, after Iliescu's defeat by Emil Constantinescu in the presidential elections of the previous year, Michael's citizenship was restored and he was allowed to visit Romania again. Several confiscated properties, such as Pele? This item is in the category "Collectibles\Historical Memorabilia\Royalty Collectibles".