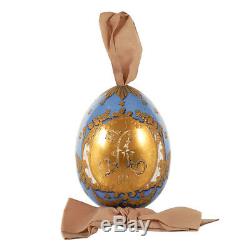 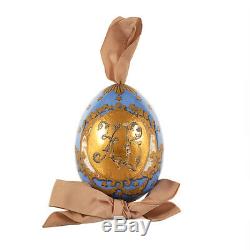 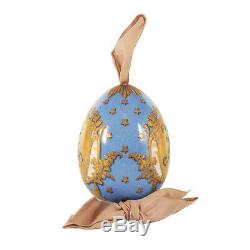 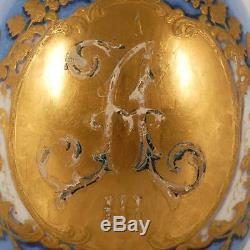 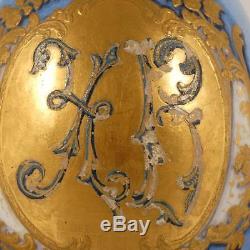 The turquoise blue glazed body impressed with the gilt shield and cypher of Tsar Alexander III. The reverse with Cyrillic initials XB Kh. , an abbreviation for the Easter greeting "Christ is Risen" on the reverse. Condition: Wear to the decoration. As the ceremony of Easter greetings expanded to include more and more people in the 19th century, it was decided to include a certain number of eggs with the sovereign's Imperial cypher.

The factory's records indicate that the tradition began during the reign of Alexander III r. The egg above, while it has sustained some wear, is most likely a rare and early example of this new practice.

In 1890, the court sent instructions specifying that the Emperor's Imperial monogram had to match the form on the shoulder boards worn by officers of the Imperial Army. On this, see Tamara Kudriavtseva and Harold Whitbeck, Russian Imperial Porcelain Easter Eggs.

Height 3 3/4 (9.5 cm). Some wear to glaze and gilding (visible in photos). All items offered are guaranteed genuine and authentic and are described accurately as possible.

The seller is "atzbach-russian-antiques" and is located in Redmond, Washington. This item can be shipped worldwide.