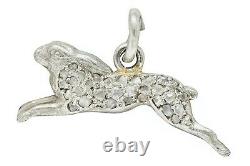 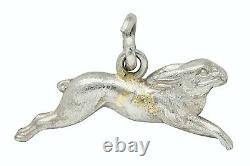 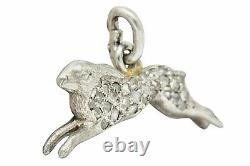 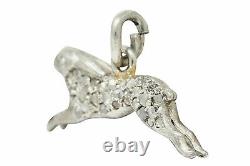 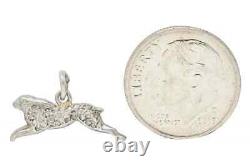 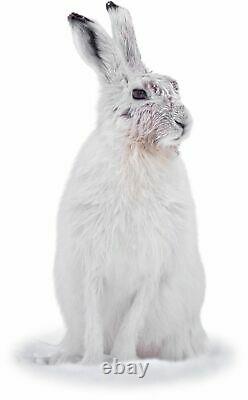 One Of A Kind Miniature 1900 Imperial Russian Platinum Diamonds Highly Detailed Full Body Sprint Artic Hare Rabbit Charm?? Unmarked but that is normal for platinum of that age, which makes it very possibly an unmarked Faberge, perhaps even made for Alfred Nobel since he asked Karl Faberge personally to create for him small jewels of no significant value which he could gift for Christmas to his employees back home so this fits all the criteria, no? How-ever my asking price is that of an Imperial Russian jewel and not of a Faberge since it is unmarked. Weighs approximately 1.8 grams.

Approximately 1.8 cm (11/16 inches) in length from hare nose tip to rear feet end, and approximately 8 mm (4.8/16 inches) in height from attachment loop top, not including the bale, to feet bottom. 32 tiny old mine diamonds crammed in with exceptional skill. What I love about the way these tiny diamonds are only securely set on one side as though to represent snowflakes that are gathering on one side of the hare since snow can sometimes fall sideways, for I have seen and experienced similar snow gathering on the side of exposure during consistent movement in one direction. Whats really nice about this is that the observer can also observe the original metal work if one so chooses! The artic hare is full body three dimensional and is capable of standing on all four paws!

Imagine how small it is yet when enlarged to a full size hare maintains anatomical accuracy, thus extremely highly and accurately detailed which could only mean it was created by an extremely gifted jeweler, thus perhaps a Faberge whom were so famous for their rabbits and hares! The only one I have ever seen in platinum, one of a kind, even the Russian museums and billionaires do not have anything quiet like it!

Have you ever seen an artic hare, truly majestic creatures so to hell with their human hunters. The Artic hare is capable of free standing so a miniature platinum sculpture at its best, now see if you can beat that!

Feel free to check out my Arctic Fox Friend Nearby? Catch this artic hare if you can, but if you can't just be happy its free!

(LAST TWO IMAGES FOR REFERENCE ONLY NOT INCLUDED IN SALE). Do Not Hunt, It Is No A Sport But Horrible Crimes Against Nature, & God Bless! This item is in the category "Jewelry & Watches\Vintage & Antique Jewelry\Necklaces & Pendants". The seller is "bluefirebreather" and is located in this country: US. This item can be shipped worldwide.