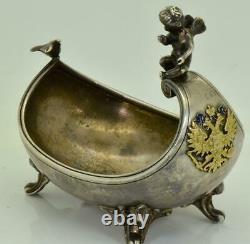 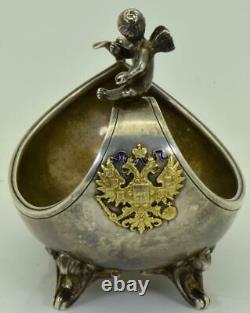 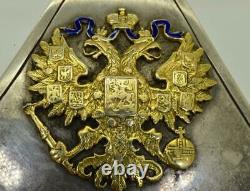 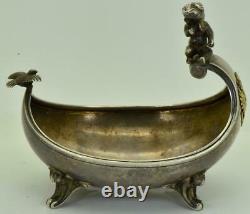 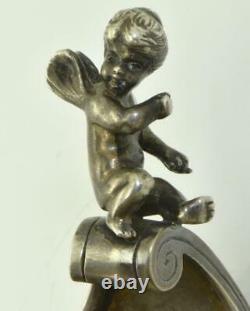 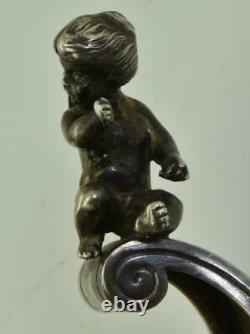 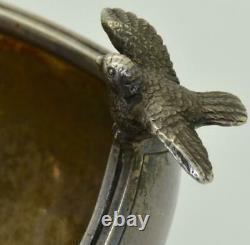 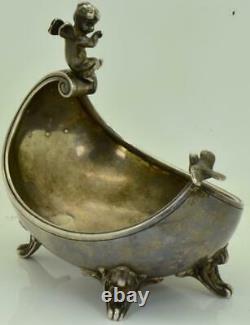 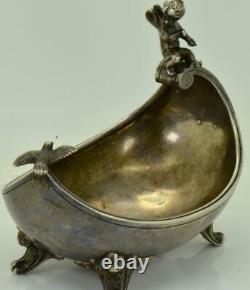 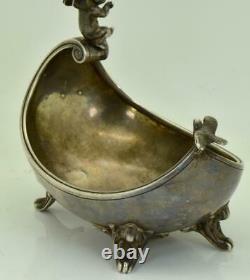 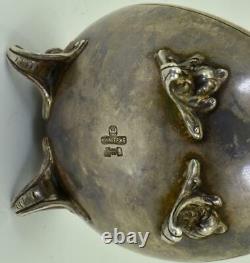 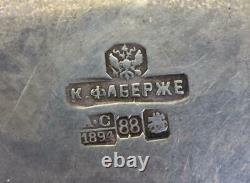 The kovsh is decorated with the Romanov's family coat of arms-the gold plated crowned double headed eagle, decorated with blue enamel. Signed with the full K. Faberge Moscow branch hallmark with the Imperial wrant eagle above, 88 fine purity silver hallmark , plus the assay master hallmark with the year 1894, and the Moscow city hallmark of St. The kovsh is a Russian ladle or drinking vessel that dates back thousands of years to the tenth century. In this era they were simple wooden products used to drink braga (a light beer), kvass (a brew fermented from black bread), and mead (a slightly alcoholic drink derived from honey).

The avian shape of the kovsh emphasises the Russian affinity with nature. In Russian culture around this time ducks were seen as a link among the earthly, heavenly, and underground realms, since they live on the earth, fly in the sky, and swim in the water (which they believed led to the underworld). It was around the middle of the fourteenth century when the first metal models of the kovsh appeared.

In this period, the name kovsh was created for the vessel. Due to the variation in sizes, origin and uses, it is perhaps best to refer to the vessel as kovshi. Over the centuries there have even been different terms invented to refer to the diverse kovshi. The larger kovshi, referred to as vynosny, were shared between dining companions, the smaller ones known as piti, were given to each guest as real glasses. The smaller, individual-sized kovshi were sometimes utilised as a ladle, used to pour out the drink from a larger kovsh.

For presentation purposes, the smaller kovshi used as ladles were often hooked on the side of the larger kovshi. Perhaps the most famous form of kovshi is the zhalovannye.

This form of kovshi was popular around the eigthteenth century. The zhalovannye almost entirely lost their function as vessels and started to become made for decorative purposes. They were frequently awarded as gifts from the Tsars to loyal supporters of the empire, often the zhalovannye would have been engraved with the recipients name on the side. An example of the gifting of a kovshi is Tsar Peter I the Great presenting to Frederick Augustus I of Saxony a beautiful kovshi made of gold and Niello, wonderfully decorated with pearls and sapphires. Although the kovsh suffered from a slight decline in the mid nineteenth century, there was a resurgence of the kovsh in the late nineteenth century as purely an ornamental object. Some of the famous Russian silver craftsmen including Ovchinnikov, Khlebnikov, Maria Semenova and also Fabergé created colourful examples of the kovshi, mostly decorated with cloisonné technique and further ornamented with precious stones, with the most varied shapes: viking boats, horses, birds. Today the kovsh can be what you make of it, whether that is as a vessel for drinking or a table ornament. Either way, anyone that looks upon a kovsh cannot deny its beauty!

NOTE:PLEASE OBSERVE CAREFULLY THE PHOTOS! IT IS A SIGNIFICANT PART OF THE DESCRIPTION.

Every potencial defect which is shown in the photos, but not mention in the description, will be considered for described. All the photos shoot by professional Nikon 105 Macro lens under 40x diopter magnification, so you can explore even the smallest detail like under microscope! Auctiva offers Free Image Hosting and Editing. The item "MUSEUM Imperial Russian Faberge award silver&enamel ritual Kovsh ladle c1894" is in sale since Sunday, September 6, 2020. This item is in the category "Collectibles\Decorative Collectibles\Decorative Collectible Brands\Faberge". The seller is "riaerica2000" and is located in Sofia. This item can be shipped worldwide.