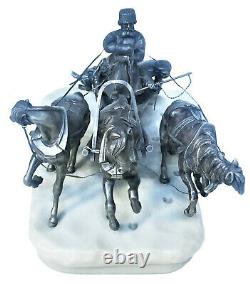 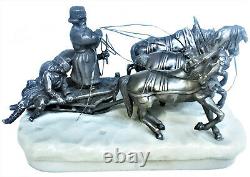 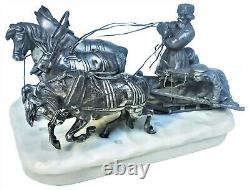 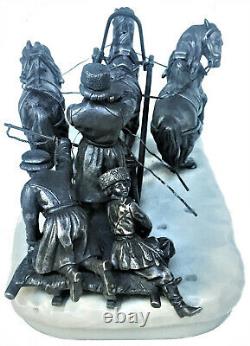 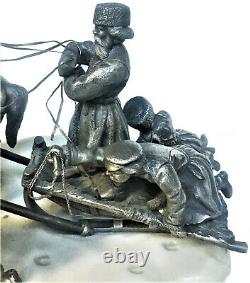 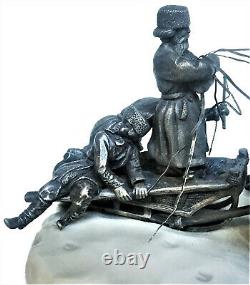 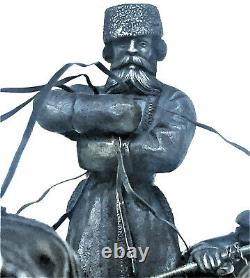 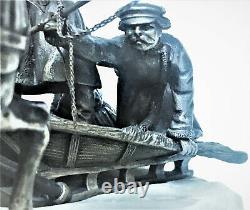 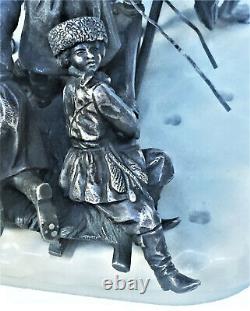 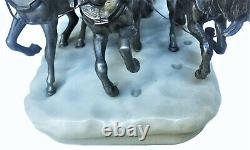 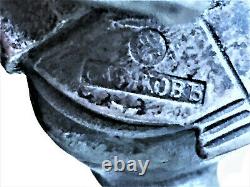 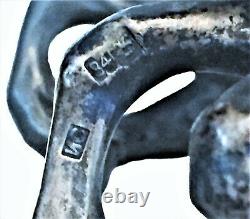 The sculpture depicts an elderly peasant, standing to his full height with reins in his hands; behind him in a sleigh are his son and grandson, who drives the horses with a whip. Dressed in typical peasant clothes, all three have very expressive faces. The entire composition of this outstanding silver sculpture, including the original marble base are executed with such high skill that one could imagine the steam pouring out of the horses?

Nostrils in the frosty air; and hear the sound of crisp snow under their hooves. The troika gallops at full speed, leaving behind clear traces of horseshoes on the virgin snow.

Fully hallmarked with maker's marks «?? » (IS for Ignaty Sazikov), SAZIKOV beneath Imperial warrant, 84 silver standard, and Moscow town crest. 84-standard silver (sculpture), Makarov white Ural marble (base). There are intact little bell on the yoke of a central horse, and an original detachable hallmarked whip.

The original, intricately executed marble base is an integral part of the whole composition. The sculpture was never cleaned or polished, and has an original patina. Sotheby's New York, 1992. Private collection, New York City. Ignaty Sazikov (1793 - 1868). Is undoubtedly one of the most important Russian silversmiths and jewelers of all times. Ignaty Sazikov, the Sazikov firm founder's son, was the dynasty's most renowned member, and his talent earned him the unofficial title of Russia's Benvenuto Cellini. Born in Moscow province in 1793, he moved with his family to Moscow where he was apprenticed to his father.

S death in 1830, he inherited his workshop and opened a factory in St. Petersburg and a professional school for eighty goldsmiths and silversmiths. In 1846, the firm received the Imperial Warrant by Tsar Nicholas I, becoming official supplier of the Tsar. The firm produced mainly objects of vertu and exclusive tableware in Neo-Russian style; sculptural and figurative pieces, representing historical themes or genre scenes, as well as icon rizas, and even icon screens for churches.

The articles differed in artistic value and prices, ranging from the most ordinary to exclusive ones intended for the royal court and for trade fairs. Sazikov contracted the most prominent Russian artists and sculptors of his time to work on his orders. The firm has also exhibited in several World Fairs - at the Great Exhibition in London in 1851, Ignaty Sazikov received gold medal; and in 1867, he was awarded with the legion d?

Honneur at the Exposition Universelle in Paris. One of his most important pieces that won him the golden awards is a desk-size sculpture, representing a trio of horses, created by the great Eugene Lanceray, a famous Russian painter and sculptor. SAZIKOV'S TROIKA: THE EXHIBITION.

In his Decree dated December 11 (22), 1719, Peter the Great set up a state form of storing valuables, which belonged to Russia. According to this Decree, special department, Kammer Collegium, was founded. Its regulations listed the existing valuables and stated the procedure of their storage in the State Treasury, called GOHRAN nowadays.

A unique exhibition organized and curated by GOHRAN took place In Moscow in winter of 2014, The Great Masters of the 19th Century. The Sazikov Jewelry House and its Contemporaries.

Today, the work of the Sazikov jewelry house is in the collections of the largest museums in the world - the Moscow Kremlin, the State Hermitage Museum, the Victoria and Albert Museum in London, as well as in private collections. However, a special place is occupied by Sazikov's collection of the Gokhran of Russia.

The collection demonstrates the highest level of the masters of the company, their contribution to the development of small sculptures and ornamental art. SAZIKOV'S TROIKA: THE COMMEMORATIVE COIN. In 2016, in honor of the Sazikov jewelry company, the Bank of Russia has issued a? Commemorative coin, made of 925 silver of a total weight of 169 grams. Featuring on the obverse the famous Troika sculpture by Ignaty Sazikov, the coin was minted at the St. Petersburg Mint and amounted to 850 copies. SAZIKOV'S TROIKA: THE COMMEMORATIVE MEDAL.

In 2017, Goznak a Russian. As well as manufacturing security products including banknotes, coins, stamps, identity cards, secure documents, state orders and medal has released a series of 7 table medals dedicated to illustrious Russian jewelers. One of the medals is dedicated to Ignaty Sazikov.

The obverse of the medal depicts the famous sculptural composition "Troika", created by the House of Sazikov after the design and model of no-less famous artist and sculptor, Eugene. SAZIKOV'S TROIKA: THE POSTAL STAMP. We guarantee the authenticity of all items to be as represented. Ashville Fine Arts Gallery specializes in a variety of fine art, antiques, jewelry, collectibles and rare finds. If you have not seen something that interests you or that you collect, please visit often and check our ever-expanding inventory. We make a best effort to provide a fair and descriptive condition report. Please examine the photos attentively, as they are an integral part of item descriptions. Domestic & International Customers are Welcome! All items are carefully packed and insured.

Please send us a message. The item "Imperial Russian Silver Troika by I.