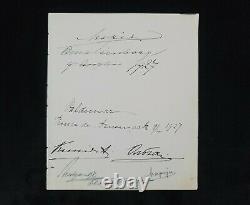 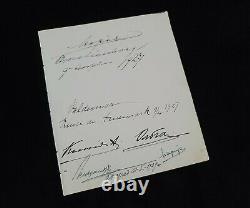 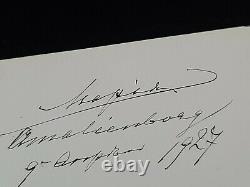 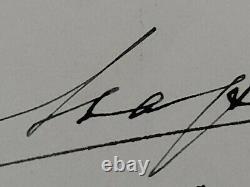 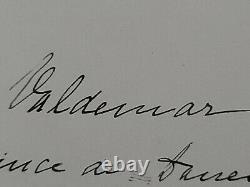 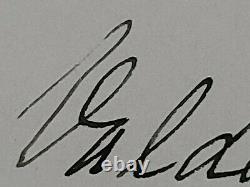 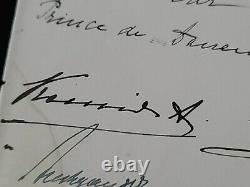 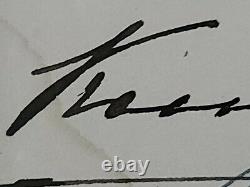 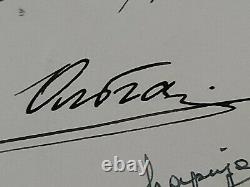 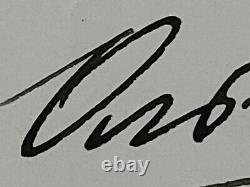 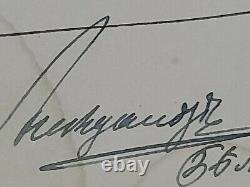 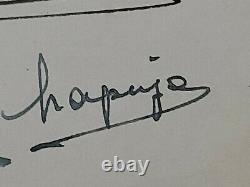 Page will be carefully removed from album. Album page measures approximately 5.5" × 6.5". Romanized: Mariya Fyodorovna; 26 November 1847 - 13 October 1928, known before her marriage as Princess Dagmar of Denmark, was a Danish princess who became Empress of Russia as spouse of Emperor Alexander III. Her eldest son became the last Russian monarch, Emperor Nicholas II of Russia - she lived for 10 years after Bolshevik functionaries killed him and his immediate family in 1918.

Prince Valdemar of Denmark (27 October 1858 - 14 January 1939) was a member of the Danish royal family. He was the third son and youngest child of Christian IX of Denmark and Louise of Hesse-Kassel. He had a lifelong naval career. He was paternal uncle of Prince Andrew of Greece and Denmark, father of Prince Philip, Duke of Edinburgh.

1 June 1882 - 24 November 1960 was the youngest child of Emperor Alexander III of Russia and younger sister of Emperor Nicholas II. Romanized: Aleksandar I Karadordevic, pronounced aleksa? 4 December - 9 October 1934, also known as Alexander the Unifier, was the prince regent of the Kingdom of Serbia from 1914 and later the king of Yugoslavia from 1921 to 1934 (prior to 1929 the state was known as the Kingdom of Serbs, Croats and Slovenes).

He was assassinated by the Bulgarian Vlado Chernozemski of the Internal Macedonian Revolutionary Organization, during a 1934 state visit to France. Maria of Yugoslavia (born Princess Maria of Romania; 6 January 1900 - 22 June 1961), known in Serbian as Marija Karadordevic Serbian Cyrillic:?????? , was Queen of the Serbs, Croats and Slovenes, later Queen of Yugoslavia, as the wife of King Alexander from 1922 until his assassination in 1934. She was the mother of Peter II, the last Yugoslav monarch. Her citizenship was revoked and her property confiscated by the Yugoslav Communist regime in 1947, but she was "rehabilitated" in 2014.