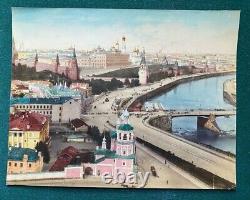 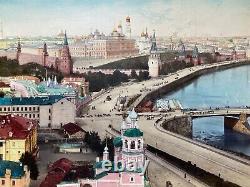 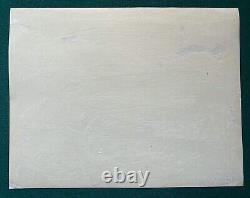 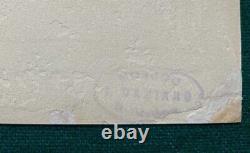 We believe in offering clients items that are unique and rare for aficionados of the antique and collector's world. Bibelot is a late nineteenth century word derived from the French word bel'beautiful', meaning a small item of beauty, curiosity or interest.

The word ephemera is derived from the sixteenth century Greek word ephmera meaning a printed or hand written paper not meant to be retained for a long period of time. Beautiful antique hand coloured photo of Moscow taken circa 1880 of the view of the Kremlin in Moscow. The Kremlin is a fortified complex at the heart of Moscow, overlooking the Moskva River to the south, Saint Basil's Cathedral and Red Square to the east, and the Alexander Garden to the west. It is the best known of the kremlins (Russian citadels) and includes five palaces, four cathedrals, and the enclosing Kremlin Wall with Kremlin towers.

The complex serves as the official residence of the President of the Russian Federation. It had been traditionally used for coronation ceremonies under the Tsars After 1851, the Kremlin changed little until the Russian Revolution of 1917; the only new features added during this period were the Monument to Alexander II and a stone cross marking the spot where Grand Duke Sergei Alexandrovich of Russia was assassinated by Ivan Kalyayev in 1905. These monuments were destroyed by the Bolsheviks in 1918. The Soviet government moved from Petrograd to Moscow on 12 March 1918.

Vladimir Lenin selected the Kremlin Senate as his residence. Joseph Stalin also had his personal rooms in the Kremlin. He was eager to remove all the "relics of the tsarist regime" from his headquarters. Golden eagles on the towers were replaced by shining Kremlin stars, while the wall near Lenin's Mausoleum was turned into the Kremlin Wall Necropolis.

The Chudov Monastery and Ascension Convent, with their 16th-century cathedrals, were dismantled to make room for the military school and Palace of Congresses. The Little Nicholas Palace and the old Saviour Cathedral were pulled down as well. The residence of the Soviet government was closed to tourists until 1955. It was not until the Khrushchev Thaw that the Kremlin was reopened to foreign visitors. The Kremlin Museums were established in 1961 and the complex was among the first Soviet patrimonies inscribed on the World Heritage List in 1990.

Although the current director of the Kremlin Museums advocates a full-scale restoration of the destroyed cloisters, recent developments have been confined to expensive restoration of the original interiors of the Grand Kremlin Palace, which were altered during Stalin's rule. The Patriarch of Moscow has a suite of rooms in the Kremlin, but divine service in the Kremlin cathedrals is held irregularly, because they are still administered as museums.

Size: 21 x 26.5 cm approx. Photos form part of the description. This item is in the category "Collectables\Historical Memorabilia\Royalty Collectables".