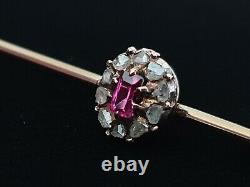 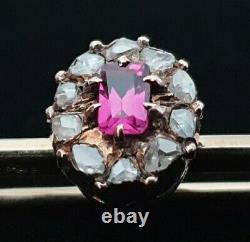 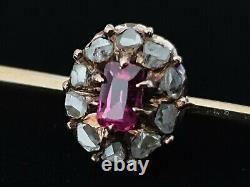 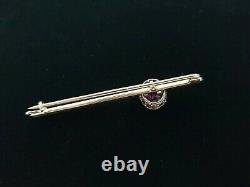 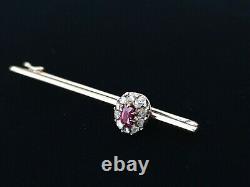 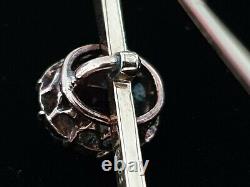 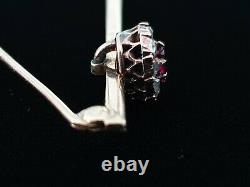 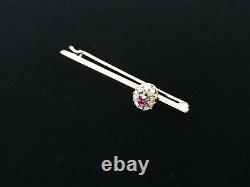 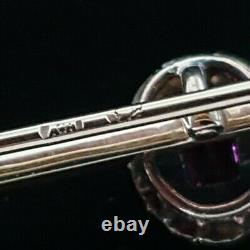 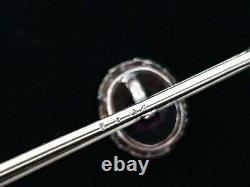 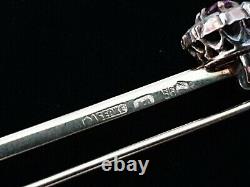 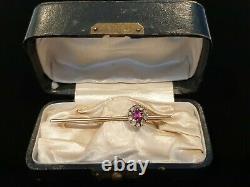 Leather and silk lined Imperial Russian presentation case (not original to the brooch; however period). Hallmarked in 5 places, (3) on gold brooch itself and (2) on the pin. Both the brooch and pin share the same FABERGE maker's / workmaster mark: AH for Faberge workmaster Hollming, August Frederik. His mark is'AG' in Cyrillic A?

August Frederik Hollming (in Russian'Golming'; 3 December 1854 - after 1915) was a Finnish silver- and goldsmith, and a Fabergé workmaster. Hollming was born in Loppi, Finland, the son of a bookkeeper, Anders Gustaf Hollming of Loviisa, and of Katarina Petterson of Uusikaarlepyy. Hollming was apprenticed to the goldsmith Carl Friedrich Ekholm in Helsinki at the beginning of the 1870s. In 1876, he settled in St.

Petersburg and registered as a goldworker. In 1880, he qualified as a master and opened his workshop at 35 Kazanskaya Street; he was soon thereafter hired by Fabergé. In 1900, the Hollming workshop moved to 24 Bolshaya Morskaya, under the same roof as Fabergé. He mainly produced cigarette cases in silver, gold, and enamel; miniature Easter Egg; and small gem-set, enameled jewels such as cuff-links, brooches, and pins. Many times he produced these objects for the House of Fabergé.

The design of the jewelry was surprisingly modern and ahead of its time. He ran the workshop with Otto Hanhinen, his father's assistant until 1915. Peter Carl Fabergé, also known as Karl Gustavovich Fabergé Russian:????

´, Karl Gustavovich Faberzhe; 30 May 1846 - 24 September 1920, was a Russian jeweller best known for the famous Fabergé eggs made in the style of genuine Easter eggs, but using precious metals and gemstones rather than more mundane materials. He was one of the sons of the founder of the famous jewelry legacy House of Fabergé. Peter Carl Faberge was born in Saint Petersburg, Russia, to the Baltic German jeweller Gustav Fabergé and his Danish wife Charlotte Jungstedt. Gustav Fabergé's paternal ancestors were Huguenots, originally from La Bouteille, Picardy, who fled from France after the revocation of the Edict of Nantes, first to Germany near Berlin, then in 1800 to the Pernau (today Pärnu) Baltic province of Livonia, then part of Russia, now Estonia. Until he was 14 years old he went to the German St Anne School in Saint Petersburg, Russia.

[citation needed] In 1860 his father retired from his jewelry business and moved with his family to Germany. He left the House of Fabergé in Saint Petersburg in the hands of his business partner. Carl Fabergé undertook a course at the Dresden Arts and Crafts School.

In 1862 Agathon Fabergé, the Fabergés' second son, was born in Dresden, Germany, where he went to school as well. In 1864, Peter Carl Fabergé embarked upon a Grand Tour of Europe. He received tuition from respected goldsmiths in Germany, France and England, attended a course at Schloss's Commercial College in Paris, and viewed the objects in the galleries of Europe's leading museums. Petersburg and married Augusta Julia Jacobs. 1874 saw the arrival of his first child, Eugene Fabergé and two years later, Agathon Fabergé was born; Alexander Fabergé and Nicholas Fabergé followed in 1877 and 1884 respectively. For the following 10 years, his father's trusted workmaster Hiskias Pendin acted as his mentor and tutor. The company was also involved with cataloguing, repairing, and restoring objects in the Hermitage during the 1870s.