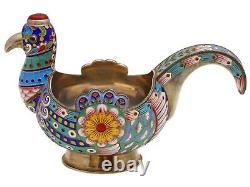 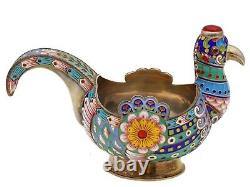 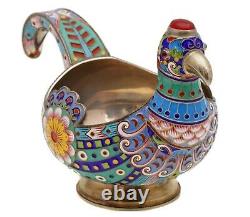 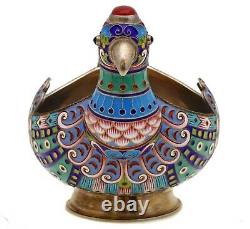 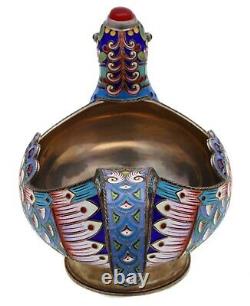 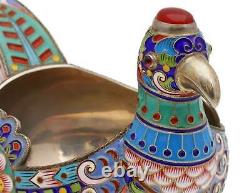 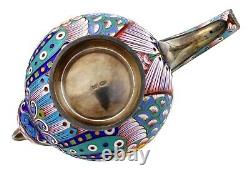 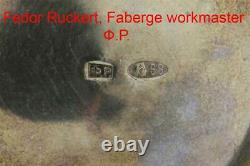 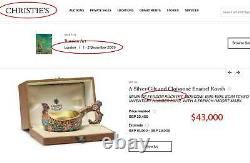 EXTREMELY RARE - RUSSIAN IMPERIAL ENAMEL KOVSH, FEODOR RUCKERT. Extremely nice job as any items made by Fedor Ruckert. A traditional Russian vessel for water - kovsh, made with a comfortable handle, and admirable unique enameled exterior in the form of a bird with various shades of blue, pink, and yellow floral and geometrical patterns on it, made in cloisonne technique, with inlaid burgundy semi-precious stones on top of the head and on an eyes place. Stamped on the bottom with Russian hallmarks and marked'88' Silver, Kokoshnik, and'F. In Cyrillic for Fedor Ruckert - FABERGE workmaster - please see information bellow.

Just make a deposit 10% and the item will wait for you. WORKMASTER : One of the greatest names in enamelled silver is that of Feodor Ruckert, whose silver gilt, shaded and matte black enamel punchbowl and ladle of about 1910 represent the imaginative and virtuosic aspects of his work (see cover).

Alive with vivid depictions of bears, convivial warriors, maidens, and hoary sages whose enamelled features are further enlivened by the three-dimensional effects of repousse surfaces, the punchbowl embodies the haunting nostalgia for a Russian Neverland that was so much a part of late nineteenth-century aristocratic culture. WIKIPEDIA : The Kovsh is a traditional drinking vessel or ladle from Russia. It was oval-shaped like a boat with a single handle and may be shaped like a water bird or a Norse longship.

Originally the Kovsh made from wood and used to serve and drink mead, with specimens excavated from as early as the tenth century. Metal Kovsh began to appear around the 14th century, although it also continued to be carved out of wood and was frequently brightly painted in peasant motifs. By the 17th century, the Kovsh was often an ornament rather than a practical vessel, and in the 19th century it was elaborately cast in precious metals for presentation as an official gift of the tsarist government. The item "EXTREMELY RARE RUSSIAN IMPERIAL ENAMEL KOVSH, FEODOR RUCKERT" is in sale since Sunday, June 6, 2021.