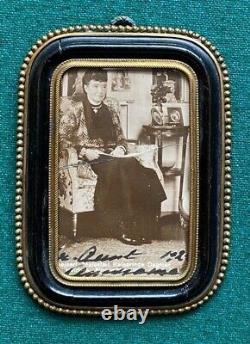 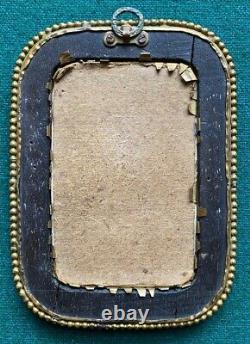 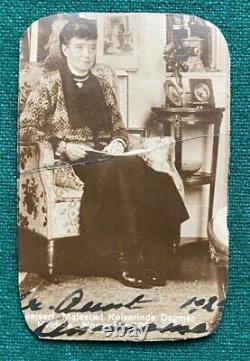 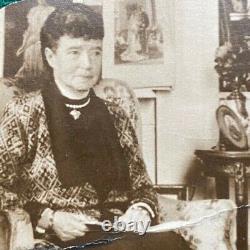 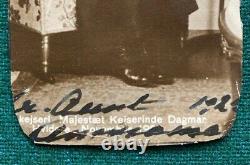 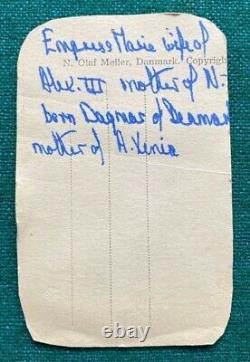 Bibelot is a late nineteenth century word derived from the French word bel beautiful, meaning a small item of beauty, curiosity or interest. The word ephemera is derived from the sixteenth century Greek word ephmera meaning a printed or hand written paper not meant to be retained for a long period of time. The postcard shows the Empress at home in exile in Hvidore in Denmark. Signed in English "Yr Aunt 1925 Christmas".

On the reverse is another message in English by a member of the Kulikovsky brothers family whose mother was Grand Duchess Olga, sister of Grand Duchess Xenia. Christened Dagmar, she was a Danish princess who became Empress of Russia as spouse of Emperor Alexander III of Russia.

She was the second daughter of King Christian IX of Denmark and Louise of Hesse-Cassel and sister of Britain's Queen Alexandra, and King George I of Greece. Among her children was the last Russian monarch, Emperor Nicholas II of Russia, whom she outlived by ten years. Princess Marie Sophie Frederikke Dagmar was born at the Yellow Palace in Copenhagen. Her father was Prince Christian of Schleswig-Holstein-Sonderburg-Glücksburg, a member of a relatively impoverished princely cadet line.

Her mother was Princess Louise of Hesse-Kassel. Tsar Alexander II of Russia searched for a bride for the heir apparent, Tsarevich Nicholas Alexandrovich of Russia, in countries other than the German states that had traditionally provided consorts for the tsars. In 1864, Nicholas, or "Nixa" as he was known in his family, went to Denmark where he was betrothed to Dagmar. On 22 April 1865 he died from meningitis. His last wish was that Dagmar would marry his younger brother, the future Alexander III.

On 1 November 1894, Alexander III died aged just forty-nine at Livadia and Tsar Nicholas II became Emperor of Russia. After the revolution of 1917 she fled the Crimea on board HMS Marlborough with many other refugees. She settled in a villa she had bought with her sister Hvidore in Copenhagen. On 13 October 1928 at Hvidøre near Copenhagen, in a house she had once shared with her sister Queen Alexandra, Maria died at the age of 80, having outlived four of her six children. Following services in Copenhagen's Russian Orthodox Alexander Nevsky Church, the Empress was interred at Roskilde Cathedral. Petersburg in accordance with her wish to be interred next to her husband. A number of ceremonies took place from 23 to 28 September 2006.

The item "Antique Signed Postcard Imperial Russian Dowager Empress Romanov Dagmar 1925" is in sale since Sunday, November 22, 2020. This item is in the category "Collectables\Autographs\Uncertified Originals\Historical". The seller is "bibelotslondon" and is located in London.