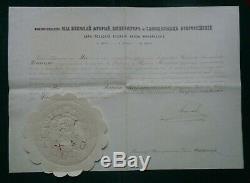 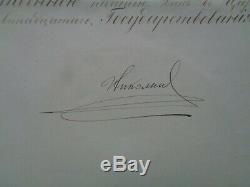 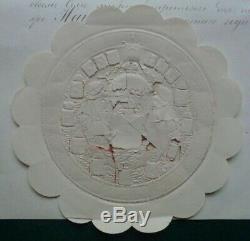 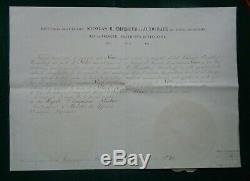 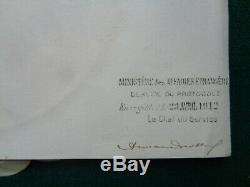 We believe in offering clients items that are unique and rare for aficionados of the antique and collector's world. Bibelot is a late nineteenth century word derived from the French word bel beautiful, meaning a small item of beauty, curiosity or interest. The word ephemera is derived from the sixteenth century Greek word ephmera meaning a printed or hand written paper not meant to be retained for a long period of time. We by the Grace of God, Nicolas II, Emperor and Autocrat of All Russias. King of Poland, Grand Duke of Finland etc..

Let know by the current that we have named the State Councillor Alexander Vassilev Vassilikoff to the position of Consul General to Algeria and Tunisia. To these causes we request that each and every who will see this (current document) to recognise M Vassilikoff as such and for the competent authorities to grant him their assistance in the duty of his functions that he is in charge of as well as to ensure that he all the privileges, rights and immunities that are assigned to the post and thus conferred to him. In faith of such, we have signed the current by our own hand and have affixed our Empire's seal. Delivered at Tsarskoe Selo on 12th March of the Year of Grace nineteen twelve and of the 18th year of our reign.

The original has been signed by hand by his Majesty Emperor Nicholas. Countersigned: The Minister of Foreign Affairs Sazonov. Nicholas II was the last Emperor of Russia, ruling from 1 November 1894 until his forced abdication on 15 March 1917. His reign saw the fall of the Russian Empire from being one of the foremost great powers of the world to economic and military collapse. Russia suffered a decisive defeat in the Russo-Japanese War, which saw the annihilation of the Russian Baltic Fleet at the Battle of Tsushima, loss of Russian influence over Manchuria and Korea, and the Japanese annexation of South Sakhalin.

The Anglo-Russian Entente, designed to counter German attempts to gain influence in the Middle East, ended the Great Game between Russia and the United Kingdom. Nicholas approved the Russian mobilization on 31 July 1914, which led to Germany declaring war on Russia on the following day. It is estimated that around 3.3 million Russians were killed in World War I. The Imperial Army's severe losses and the High Command's incompetent management of the war efforts, along with the lack of food and other supplies on the Home Front, were the leading causes of the fall of the Romanov dynasty. Following the February Revolution of 1917, Nicholas abdicated on behalf of himself and his son, and he and his family were imprisoned.

In the spring of 1918, Nicholas was handed over to the local Ural Soviet; with the approval of Lenin, Nicholas and his family were eventually murdered by the Bolsheviks on the night of 16-17 July 1918. The recovered remains of the Imperial Family were finally re-interred in St. In 1981, Nicholas, his wife and their children were canonized as martyrs by the Russian Orthodox Church Outside Russia, located in New York City. On 15 August 2000 Nicholas and his family were canonised as passion bearers, a title commemorating believers who face death in a Christ-like manner, by the Russian Orthodox Church within Russia. Statesman and diplomat who served as Foreign Minister.

From November 1910 to July 1916. The degree of his involvement in the events leading up to the outbreak of World War I. Is a matter of keen debate, with some historians putting the blame for an early and provocative mobilisation.

Squarely on Sazonov's shoulders, and others maintaining that his chief preoccupation was to reduce the temperature of international relations, especially in the Balkans. Size: 53 x 37.5 cm approx. Photos form part of the description. The item "Antique Signed Imperial Russian Document Tsar Nicholas II Romanov & Sazanov 1912" is in sale since Tuesday, November 26, 2019.

This item is in the category "Collectables\Autographs\Uncertified Originals\Historical". The seller is "bibelotslondon" and is located in london.