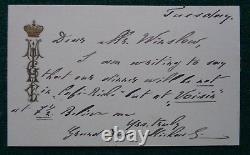 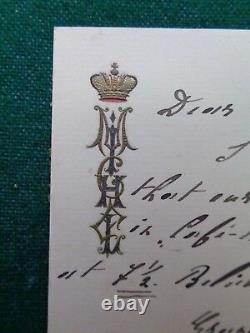 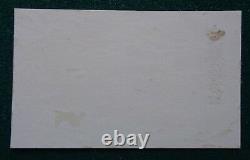 Bibelot is a late nineteenth century word derived from the French word bel'beautiful', meaning a small item of beauty, curiosity or interest. The word ephemera is derived from the sixteenth century Greek word ephmera meaning a printed or hand written paper not meant to be retained for a long period of time. From the collection of Richard and Mary Winslow, American aristocrats who had the Villa Winslow in Cannes during the 1880s and1890s and enjoyed racing, they were friends with aristocrats and royals from all over the world. Mary was a great beauty and had by family traditon once been a mistress of the Prince of Wales, later King Edward VII.

Grand Duke Michael was a son of Grand Duke Michael Nicolaievich of Russia and a grandson of Tsar Nicholas I of Russia. He was raised in the Caucasus, where he lived between 1862 and 1881 with his family, and was educated by private tutors.

As Romanov tradition demanded, he followed a military career. He served in the Russo-Turkish War in 1877, became a Colonel and was adjutant at the Imperial court. In 1891 he contracted a morganatic marriage with Countess Sophie von Merenberg, a morganatic daughter of Prince Nicholas William of Nassau and a granddaughter of the Russian poet Alexander Pushkin. For contracting this marriage without permission, Emperor Alexander III of Russia, stripped him of his military titles and banished the couple from Russia. For some years he lived in Wiesbaden, Nassau and in Cannes.

He settled permanently in England in 1900, leasing Keele Hall in Staffordshire and later Kenwood House on the outskirts of London. He became a prominent member of British society, one of his daughters marrying into the British aristocracy and another marrying a great-grandson of Queen Victoria.

He lost his fortune with the fall of the Russian monarchy in 1918. Three of his brothers were killed by the Bolsheviks, but he escaped the Russian Revolution because he was living abroad. He spent his last years living under reduced circumstances with the financial help of his son-in-law Sir Harold Wernher. Photos form part of the description.

Card Size: 14 x 8.5 cm approx. This item is in the category "Collectables\Autographs\Uncertified Originals\Historical". The seller is "bibelotslondon" and is located in this country: GB.