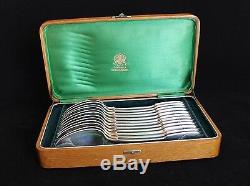 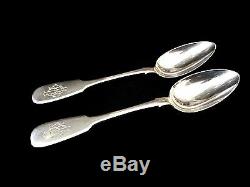 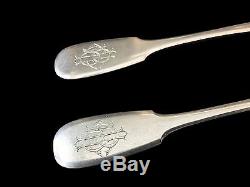 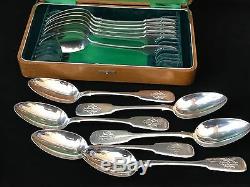 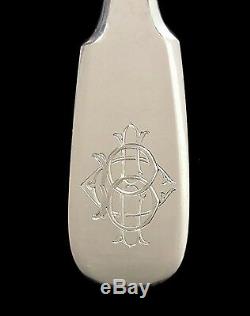 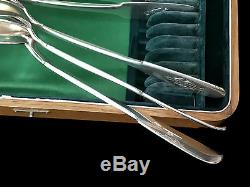 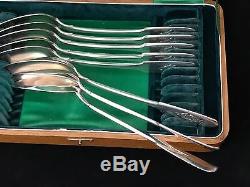 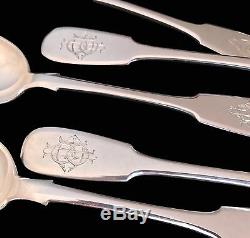 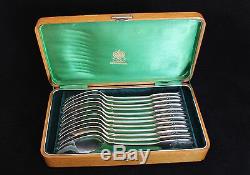 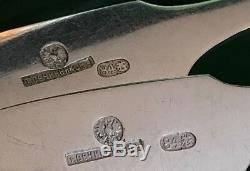 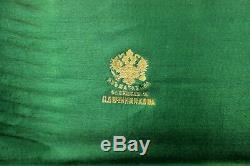 Unique Set of Twelve Gorgeous 19th Century Imperial Russian 84 Silver Spoons by Ovchinnikov in a Felt-lined Fitted Hinged Wooden an O. The each spoon is engraved with monogram in Cyrillic (Latin). I think "H" or "II", B" or "E" and "C or symbol of the fish. Belong to Russian Romanov Dynasty, dedicated possible the Catrine the Great and Nicolas II?

Measures: each spoon 8 1/2" long x 1 3/4" wide and each weight is approximately 80g. Box measures 10 1/2" long x 6" wide x 2 high. All items are accurately described to the best of our knowledge and the pictures serve as part of the description. Please check my store for other listings.

Reference: Pavel Akimov Ovchinikov - jeweller, silversmith, goldsmith, enameller, merchant, industrialist. Born in the family of a serf called Akim Ovchinnikov in the village of Otradnoe in Moscow Province (1830). Sent by Prince Dmitry Volkonsky to study in Moscow (1842), where he served as an apprentice in the jewellery workshop of his brother Andrei (184450). Emancipated from serfdom (1850) and married a woman called Marfa (1850). Opened his own workshop with his wifes dowry of a thousand roubles (1851). Acquired his brothers workshop and opened a factory on First Goncharny (Potters) Lane in Taganka (1853). Employed a staff of four hundred (1854) and six hundred craftsmen and apprentices (1855). Appointed official purveyor to the future Tsar Alexander III. (1865), King Victor Emmanuel II of Italy (1873), Grand Duke Mikhail Nikolaevich. (1878) and King Christian IX of Denmark (1888). Awarded the Légion dhonneur (1867) and the Order of the Iron Crown (1873). Founded a school for 130 goldsmiths and silversmiths (1871). Opened a factory and shops in St Petersburg at 35 Bolshaya Morskaya Street (1873) and the former premises of Sazikov. At 29 Bolshaya Morskaya Street (1900). Member of the Moscow City Duma (187688).

Died and buried at Kalitniki (Moneybags) Cemetery in Moscow (1888), where his work was continued by his sons Mikhail, Alexander, Pavel and Nikolai (18881917) and many others. The item "Antique Russian Imperial Silver Set of 12 Spoons by Ovchinnikov in Original Box" is in sale since Tuesday, May 23, 2017.

This item is in the category "Antiques\Silver\Sterling Silver (. The seller is "sv20000" and is located in Overland Park, Kansas. This item can be shipped worldwide.