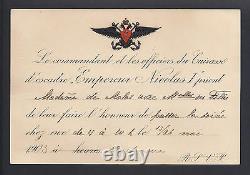 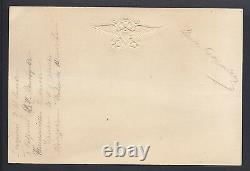 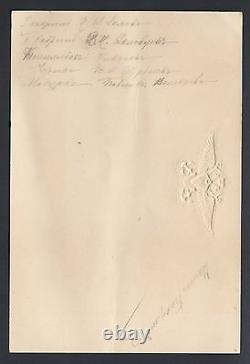 Rare partially printed and embossed Russian imperial invitation to an evening soirée hosted by the Commander and Officers of the Cuirassiers of the Breastplate of Emperor Nicholas I dated 13/25 May 1903. The invitation is beautifully embossed with a large double headed eagle in black, red and gold.

Printed in French and given to Madame de Molas and her daughters. Madame de Molas refers to the classical musician and singer Alexandra Purgolde-Molas (1845 - 1929), who promoted the songs of Mussorgsky. She was one of two sisters, both of whom were exceptionally talented musicians and quite unique among the multitude of women who pursued this art in the days of Glinka and Dargomïzhsky. The elder sister, Alexandra Nikolaevna (Alexandra Molas, by marriage) was a singer who was taught first by Dargomïzhsky and later by Mussorgsky. Her singing style, not being of the conventional operatic variety, was excellently suited to the interpretation of honest and unaffected music, whether passionate, tragic, comic or tender. Indeed, her singing was so true to the spirit of the music that now and then one of these composers would say that his work had two authors himself and the performer.

It is a French term meaning, "the one with a cuirass" (cuirasse), the breastplate armour which they wore. Cuirassiers achieved increased prominence during the Napoleonic Wars and were last fielded in the opening stages of World War I. They continue to be employed as ceremonial troops by a number of countries including Britain.

Size: 17.5 x 12 cm approx. Photos form part of the description. The item "Antique Russian Imperial Regiment Cuirassiers Invitation Tsar Nicholas Romanov" is in sale since Monday, March 12, 2018. This item is in the category "Collectables\Historical Memorabilia\Royalty Collectables". The seller is "bibelotslondon" and is located in london.