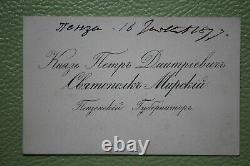 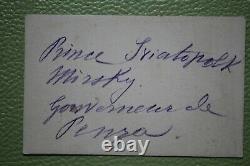 Was a Russian general, politician and police official. Svyatopolk-Mirsky was born in Vladikavkaz into the prominent Svyatopolk-Mirsky family. He was the only son of the general Dmitry Ivanovich Svyatopolk-Mirsky and Princess Sofia Orbeliani. Pyotr was educated at Page Corps, graduating in 1874 with first-class honours, and was appointed Page of the Chamber.

In 1875, he became a cornet at Her Empress Leib-Guards Hussars. He was the father to literary historian D. Svyatopolk-Mirsky took part in the Russo-Turkish War, 1877-78.

After Sipyagin's assassination in 1902, Svyatopolk-Mirsky resigned as assistant minister but was persuaded to accept the position of Governor-General of Vilna. As the Governor-General, Svyatopolk-Mirsky was credited with successful liberal reforms, defusing national tensions in the province by allowing more rights to the national minorities, stopping pogroms. In July 1904, he succeeded to the position of Minister of the Interior. His appointment was seen as a victory of Liberals. Over the Conservatives and in the Court term as a victory of the party of widow Empress Maria Fyodorovna.

(who supported the liberal reforms and was a patroness of Pyotr's sister Olga) over the party of Empress consort. And Sipiagin credited Svyatopolk-Mirsky with being an honourable, intelligent man of the highest moral principles, which is notable due to his attempts at liberal reform in Imperial Russia. These reforms began with permitting members of the local Zemstvos. To gather to discuss broader policy issues and coordination of Zemstvo programs, something that had not been permitted in Russia regularly.

The remaining reforms were embodied in a decree that called for the inclusion of elected members to the State Council, removal of the restrictions on the Old Believers. Measures to strengthen legality, extend freedom of the press and religion, broaden the authority of local self-government, eliminate unnecessary restrictions on non-Russians, and do away with exceptional laws in general. Svyatopolk-Mirsky not only allowed the congress, but also participated in its work and personally delivered its decision to Tsar Nicholas II. Along with his own plan for constitutional reforms.

Svyatopolk-Mirsky's plan included transferring more power to the State Council of Imperial Russia. The plan was much less radical than the reforms implemented by the October Manifesto. 1905, but in December 1904 it was considered ultra-radical and was dismissed.

The massacre of a peaceful demonstration in Saint Petersburg. Occurred on 22 January O.

According to Svyatopolk-Mirsky, he never had authorised the shooting of the demonstrators, but still fulfilled his final duty to the tsar, becoming the scapegoat. According to Svyatopolk-Mirsky's opponents, he not only did authorise the shooting, but also actively encouraged the demonstration in order to push his own political agenda. Svyatopolk-Mirsky was replaced as minister of the Interior by Alexander Bulygin. In February 1905 and retired from government service. As a retired Minister of Interior, he was expected to be appointed a member of the State Council of Imperial Russia.

But it was not the case. He retired from the political life until his death on 16 May 1914.

- ask me for the images to be emailed to You! Asia and rest of the world - 14-25 days. If there is a delay, I will do my best to communicate with you.

If you have any problems with items, please contact me before you post neutral or negative. I will solve any possible problems! This item is in the category "Collectibles\Historical Memorabilia\Royalty Collectibles".

The seller is "russianseashell" and is located in this country: RU. This item can be shipped worldwide.