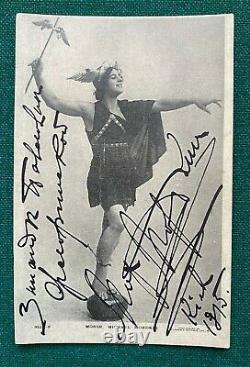 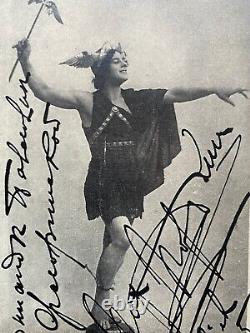 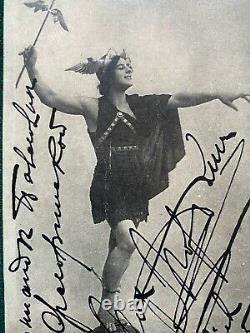 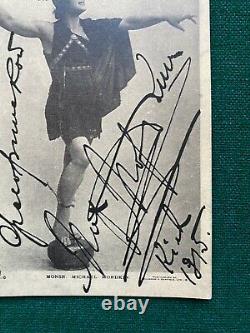 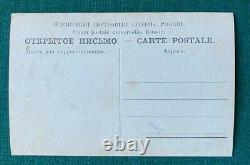 We believe in offering clients items that are unique and rare for aficionados of the antique and collector's world. Bibelot is a late nineteenth century word derived from the French word bel'beautiful', meaning a small item of beauty, curiosity or interest.

The word ephemera is derived from the sixteenth century Greek word ephmera meaning a printed or hand written paper not meant to be retained for a long period of time. Mikhail Mikhailovich Mordkin, Russian dancer and teacher, was born in Moscow on December 9, 1880 into the family of the violinist of the Imperial Theatres. At the age of nine he entered Moscow Imperial Ballet School.

Upon graduation in 1900, he was accepted to the company as a soloist. Soon after, he was promoted to premier danseur, the highest rank in the company, and was featured in practically every leading role of the company's repertory, especially character parts. At the same time, in his early twenties, he began his teaching career at the Ballet School in Moscow, and the first Russian private schools of dance and plastic movement. Even from his school days Mordkin established himself as an artist of an unusual expressiveness and passion. However, his technique was frequently criticized as not purely classical and even shaky. But the classical technique itself was not Mordkin's concern. His ambition was to render deep emotions that went far beyond the limitations of ballet traditions of the time, and to make his technique serve the purposes of portraying the character. In his performances he challenged dramatic standards of male dancing by enhancing his characters with deep feelings, rather than gallant manners, and with detailed characterization, rather than beautiful posing and partnering. Mikhail Mordkin was among the first Russian dancers to perform outside Russia.

At the invitation of Kaiser Wilhelm he organized a short season in Berlin in the summer of 1908, even before Diagilev's company opened its first season in Paris. On the opening night of Ballets Russes in Paris in 1909, Mordkin danced the leading role in Michael Fokine's Le Pavillon d'Armide, and that same year he appeared as Anna Pavlova's partner in London and the United States. His personal success was equal to Pavlova's and their partnership was one of the most significant of the century. During the next several years Mordkin organized two major tours to the United States with the All-Star Russian Imperial Ballet company; retired from and came back to the Imperial Theatres; staged a number of concert dances and small [UNK]; opened his own private ballet school in Moscow; and continued performing regularly. After the outbreak of the October Revolution Mordkin pursued many of the same activities.

He danced at the Bolshoi Theatre, organized tours all over Russia, taught, and staged ballets and concert dances. However, the growing chaos and famine of the 1920s made him look for ways of escaping Russia. In the fall of 1924, he finally obtained permission to leave for a tour to the United States.

In 1927, Mikhail Mordkin opened the Mordkin School of Dance in the Carnegie Hall building in New York City, offering complete ballet training, mimo-drama classes, [and a] rehearsal group [that would] prepare ballets for performances. This group, the Mikhail Mordkin Ballet, was an outlet for advanced students (with Mikhail Mordkin himself dancing main character parts). On December 19, 1936, the company presented Sleeping Beauty, sponsored by the Woman's Club of Waterbury, Connecticut, with Lucia Chase and Dimitri Romanoff in the leading roles. Plans for the student company became more ambitious. Advance Productions, with Lucia Chase as the major stockholder, was incorporated in March 1937, to sponsor the company.

The Mordkin Ballet began to tour nationwide with a small repertory of ballets choreographed by Mordkin. In 1938, the company was reorganized under Advanced Arts, Inc. With Rudolf Orthwine as president. Richard Pleasant managed the school and was later made secretary of the organization.

Chase and Pleasant began to plan a larger company, with more choreographers and dancers, and different artistic goals. In September of 1939, the nucleus of the Mordkin Ballet was reorganized into Ballet Theatre. Mikhail Mordkin was informed that he was no longer needed to teach or choreograph for the company, and only one of his ballets was ever produced by Ballet Theatre. Once his popularity as a dancer was enormous, he was one of the first male ballet stars of Russia, but it is as a teacher that he is best remembered in the United States.

He possessed a "vivid personality" with the ability to "transmit something of the true spirit of the dance, " and he tried to bring out special qualities in each of his students. Mordkin died in New York City on July 15, 1944. Size: 13 x 8.5 cm approx. Photos form part of the description.

This item is in the category "Collectables\Autographs\Uncertified Originals\Historical". The seller is "bibelotslondon" and is located in this country: GB. This item can be shipped worldwide.