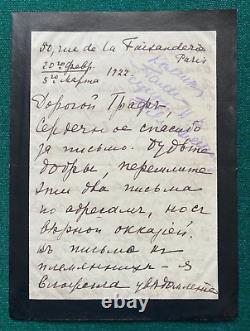 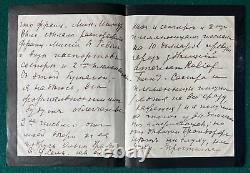 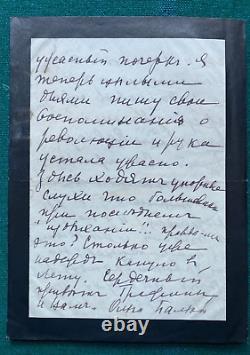 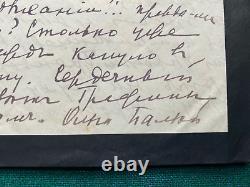 We believe in offering clients items that are unique and rare for aficionados of the antique and collector's world. Bibelot is a late nineteenth century word derived from the French word bel'beautiful', meaning a small item of beauty, curiosity or interest. The word ephemera is derived from the sixteenth century Greek word ephmera meaning a printed or hand written paper not meant to be retained for a long period of time. A very poignant letter written in Russian from Paris in France dated OS 20th February NS 5th March 1922 on her mourning stationery, discussing her sister and nieces and wondering if the Bolsheviks will be'sunk into oblivion'.

A heartfelt thanks for the letter. If its at all possible, will you please forward these two French letters to the addresses? No longer present I have attached a notice to the letter for my niece that the French Ministry of Foreign Affairs has instructed the French Mission in Revel regarding visas' for my sister's and two nieces passports.

I hope that with this document all formalities will be facilitated for them. The second latter is from my daughter to her friend Olga Brandorf in Tsarskoe Selo [no longer present]. We sent her, like my sister and two nieces, ten dollar cost provisions through the local American Relief Fund. My sister and her two nieces received it (although it seems not all at once) and I have received notification about it from the Americans; but there is no sign from the Brandorf girl. Forgive me for the terrible handwriting.

There are persistent rumours that the Bolsheviks are on their last legs. So many hopes have already sunk into oblivion. Cordial greetings to you and the Countess. Became one of the first women of nobility to attend the Imperial School of Dramatic Arts, and she appeared under the stage name of. In MGM's 1944 film.

Was allegedly one of two women and several men present in the palace belonging to Prince Felix Yusupov. On the night that Rasputin was lured there on 17 December 1916. "Malanya's also taking part, " Yussupov wrote to his wife Princess Irina. In the weeks before the murder. Marianna's' nickname was Malanya.

Dimitri, was later arrested by the Tsar's secret police following the murder. However, the Tsar later ordered her release. Sympathies were on her side, according to her mother's memoirs.

When we arrived at 8 Theatre Square, where Marianne lived, we were stopped by two soldiers who let us through only after taking down our names. All the highest society was at Marianne's! Some ladies she barely knew arrived in order to express sympathy with her. Officers came up to kiss her hand. None of the male co-conspirators ever publicly denounced Marianna or the other woman suspected of involvement, ballerina and film star Vera Karalli.

Neither were these women prosecuted in the subsequent legal trials. According to one author, the Tsar kept their names out of the case because he did not want more public displays of sympathy for the murderers of Rasputin. He also knew that his sickly uncle, Grand Duke Paul, was very upset by Dimitri's involvement in the murder and was taking badly the Tsar's decision to exile Dmitri to the Persian front.

The Tsar presumably did not want to add to the grand duke's suffering by also charging his stepdaughter. Princess Olga Paley was born as. The daughter of Valerian Karnovich and his wife, Olga Vasilyevna Meszaros. She married Erich Gerhard von Pistohlkors. By whom she had four children.

Olga and Grand Duke Paul met in St. Petersburg whilst she was married to an officer, by whom she had three children. Grand Duke Paul already was the father of two; his first wife, Princess Alexandra of Greece, had died in childbirth.

Olga was granted a divorce from her husband and soon left Russia to marry Paul in Livorna, Italy, on 10 October 1902. Grand Duke Paul and Olga were still vacationing in Rome when they were forbidden to return to Russia by Paul's nephew, the reigning Tsar Nicholas II. Grand Duke Paul arranged through Prince Regent Luitpold of Bavaria for his wife and their children to be granted the hereditary title of Count/Countess von Hohenfelsen, with a coat of arms.

They settled in Paris and bought a house in Boulogne-sur-Seine that previously belonged to Princess Zenaide Ivanovna Youssoupoff. Paul and Olga employed a household staff of sixteen maids, gardeners, cooks, and tutors and were avid art and old porcelain collectors. He was followed later by his wife and their three children. In May 1914, the family settled in Tsarskoe Selo.

In a luxurious palace filled with antiques and objects of art. Three months after they had settled into their new life, World War I.

During the war, the German title of Count/Countess von Hohenfelsen was deemed inappropriate due to anti German sentiment. So in August 1915, Nicholas II created the title of Prince and Princess Paley.

At the fall of the Russian monarchy in March 1917, instead of leaving the country, Grand Duke Paul and his wife, not seeing the dangers ahead, decided to stay in their luxurious estate amid the upheaval. As Tsar Nicholas II and his family were sent to internal exile in Siberia.

The family remained in their palace under increasingly deteriorating conditions after the Bolsheviks rise to power in October 1917. By early January 1918, they could no longer afford to heat their large Tsarkoe Selo palace, and they were forced to move to an English dacha at Tsarkoe Selo that belonged to Grand Duke Boris Alexandrovich. Their former home was expropriated and turned into a museum, while Lenin. Himself rode in their car.

In March 1918, the revolution tightened its grip. All male members of the Romanov family were ordered to register at Cheka headquarters, and shortly after were sent away into internal Russian exile. Grand Duke Paul, who was too ill to travel, initially escaped but was arrested on 30 July and sent to Spalernaia prison, where he would remain for most of his incarceration. Olga left her two youngest daughters, Irina and Natalia, aged 14 and 12, under the care of their English governess, moving with her youngest daughter Marianne von Pistolkers to be closer to her husband's prison. Worried about her daughters, Olga, with the help of a few remaining friends, organised her two young daughters escape.

In early December, they left and took a streetcar to the train station of Ochta. After a four-hour trip in a cattle wagon, they jumped into the snow and took a horse-drawn sleigh. Finally, they walked for miles in the frigid night air. After thirty-two hours of traveling, they reached.

On arriving there, they continued their journey to Vyborg. Grand Duke Paul was killed in January 1919, and tossed into a heap along with the bodies of other victims. She died in exile in Paris. On 2 November 1929, at the age of 63.

Size: 13 x 18 cm approx. Photos form part of the description. This item is in the category "Collectables\Autographs\Uncertified Originals\Historical". The seller is "bibelotslondon" and is located in this country: GB. This item can be shipped worldwide.