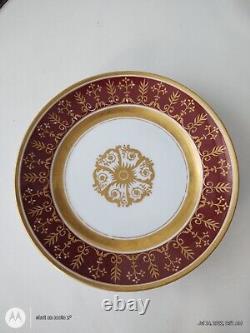 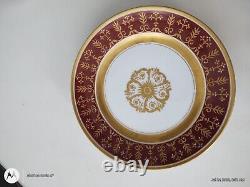 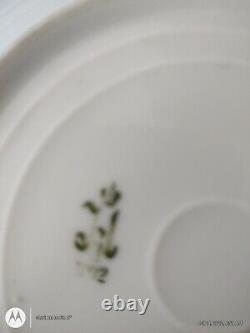 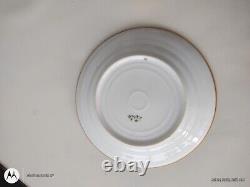 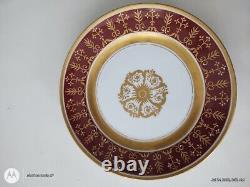 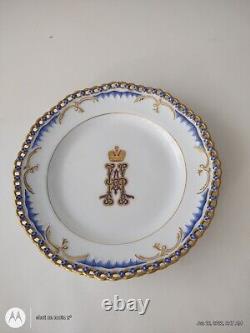 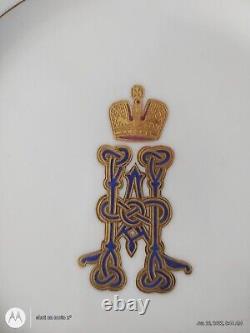 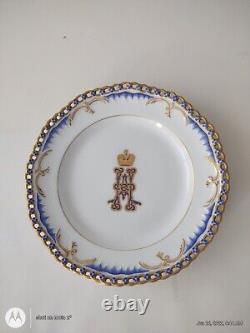 R ichly decorated with the GOLD. The interlaced letters "H" "A", and the crown are etched for texture. Marked with TSAR NICHOLAS ll PERIOD porcelain green mark.

Excellent condition - no chips, no hairlines, no cracks, no damages at all. Please, look at the pictures as they are part of the description. This is a HIGHLY IMPORTANT AND RARE PLATE most of this service is kept in russian museums and palaces. THIS SALE IS JUST FROM ONE PLATE FROM THE GURIEV SERVICE SHOWED IN PICTURES 1,2,3 4 AND 5. Pictures 6, 7 and 8 are from other plate listed separately.

Named for Count Dmitri Alexandrovich Guriev, Director of His Majesty's Cabinet during the reign of Alexander I, who ordered the service. Intended for the Winter Palace in St.

Originally known as the Russian Service, it was renamed for Guriev in 1848, when the service was transferred from the Winter Palace to Peterhof for setting the formal table in the Catherine House of Monplaisir. The pieces are decorated with ornamental gold vegetation on an overglaze brick red ground. In the reserves are polychrome depictions of scenes whose subjects are taken from Johann Gottlieb Georgi's "Folk Types of Russia" and Christian Gottfried Geissler's "Petersburg Scenes and Types, " and also of St. Petersburg and Moscow copied from work F.

The gilded, sculptured details of the vases, created from models by Stepan Pimenov and I. Komander, play a significant role in the service's design and depict peasant and folk types in classical dress. The setting included dinner, desert and tea sets.

It was orginally created for fifty place settings. In the second half of the nineteenth century it was expanded to include more than 4,500 pieces. Above: The Court Going out from the Grand Palace in Peterhof. 30.3 x 36.6 cm.

11 7/8 x 14 3/8 in. This item is in the category "Collectibles\Historical Memorabilia\Royalty Collectibles". The seller is "afarjun17" and is located in this country: US. This item can be shipped worldwide.