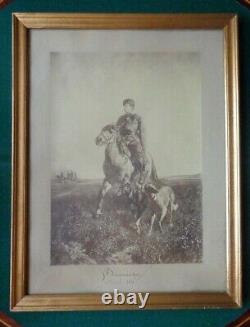 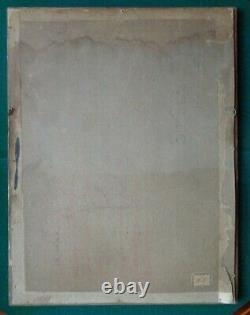 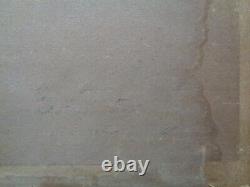 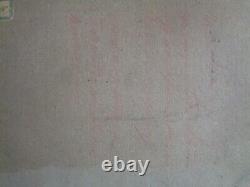 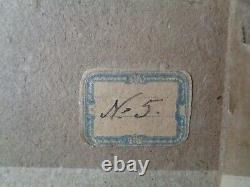 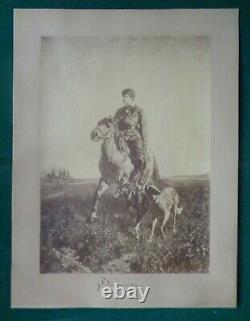 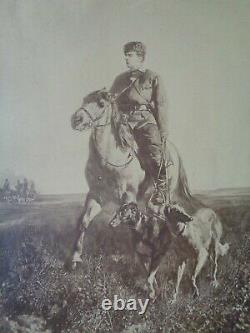 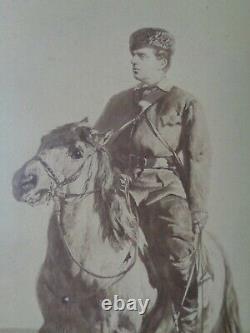 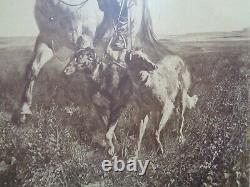 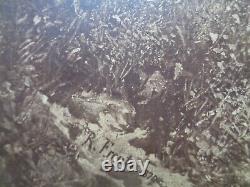 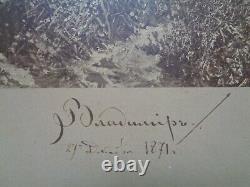 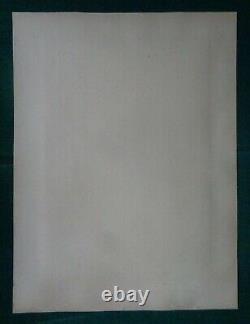 Bibelotslondon Ltd is a UK registered company based in London Bridge dealing in ephemera and curiosities from Britain and around the world. Our diverse inventory is carefully chosen and constantly evolving. We work very hard to offer the highest quality works at competitive prices. Our inventory is listed online, and we strive to keep our website completely up to date, so our customers can easily check availability. We believe in offering clients items that are unique and rare for aficionados of the antique and collector's world. Bibelot is a late nineteenth century word derived from the French word bel'beautiful', meaning a small item of beauty, curiosity or interest. The word ephemera is derived from the sixteenth century Greek word ephmera meaning a printed or hand written paper not meant to be retained for a long period of time.

Its signed and dated in Cyrillic'Vladimir 27 December 1871'. Housed in its original gilt coloured frame (no glass). On the back of the picture there appears to be two handwritten dedications in Russian, but they are too faint for me to read. There is furthermore, a Palace Label'No. 5', showing it most likely travelled with his wife Grand Duchess Marie Pavlovna when she left Russia in 1918, she was the last Romanov to leave Russian soil.

Like other male Roman's he followed a military career and occupied important military positions during the reigns of the last three Russian Emperors. Interested in artistic and intellectual pursuits; he was appointed President of the Academy of Fine Arts. He functioned as a patron of many artists and as a sponsor of the Imperial ballet. During the reign of his father he was made Adjutant-General, Senator in 1868 and a member of the Council of State in 1872. His brother, Alexander III, also promoted his career.

During the last years of his life, the rift between his family and that of Nicholas II widened. He died after a stroke in 1909.

Frentz was famous for painting hunting scenes. Born in Berlin, he graduated from the Academy of Fine Arts but is considered a Russian artist as he took Russian citizenship, but also all of his work was held in Russia. He lived near Gatchina and did a series of paintings of Grand Duke Vladimir hunting.

For several years they was in the private suite of the future Emperor Alexander III. Grand Duke Andrei Vladimirovich was a son of Grand Duke Vladimir Alexandrovich. In 1900, he began an affair with the famous ballerina Kschessinska, becoming the third grand duke to fall for her. He followed a military career and graduated from the Alexandrovskaya Military Law academy in 1905.

He occupied different military positions during the reign of Tsar Nicholas II, but with no particular distinction. He became senator in 1911 and was appointed Major General in the Russian Army in 1915.

He took part in World War I, but was away from real combat spending most of the conflict at Russia's headquarters or in St Petersburg. In February 1917, shortly before the fall of the Russian monarchy, he left St Petersburg to join his mother in Kislovodsk.

He remained in the Caucasus for the next three years. After the October Revolution he was briefly arrested along with his brother, Grand Duke Boris, but they escaped. He departed revolutionary Russia in March 1920, being the last grand duke to leave for exile. In 1921, he married his longtime mistress Mathilde Kschessinska and recognized her son as his. The couple lived in the South of France until 1929 when they moved permanently to Paris, where Kschessinska opened a ballet school.

Size of Frame: 40.5 x 52.5 cm approx. Photos form part of the description. This item is in the category "Collectables\Autographs\Uncertified Originals\Historical". The seller is "bibelotslondon" and is located in this country: GB.