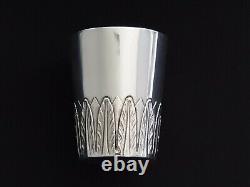 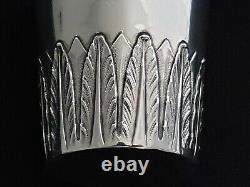 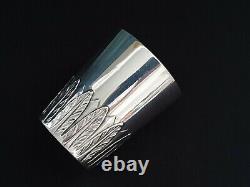 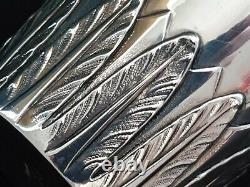 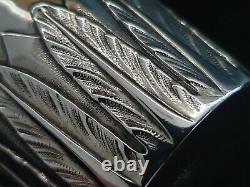 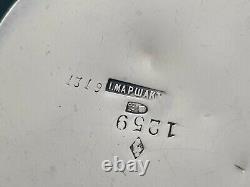 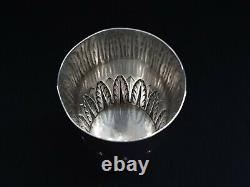 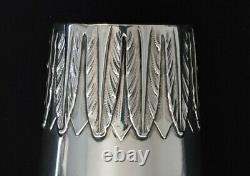 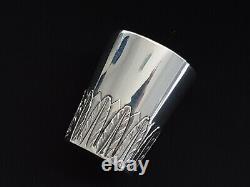 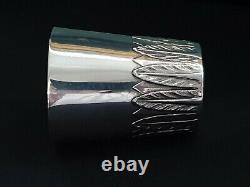 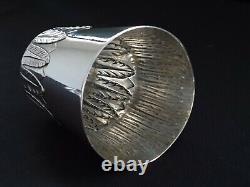 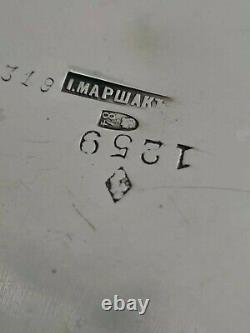 Beautifully constructed with a stiff leaf decoration. It measures 3" high x 2 3/8" in diameter at the top.

Nice weight of 140 grams / 4.50 troy ounce. The House of Marchak Russian:?????? Was founded by Joseph Abramovich Marchak, a young talented jeweler in 1878, in Kiev, then in Russia.

Considered one of the great competitors of Fabergé at the beginning of last century and sometimes called "The Cartier of Kiev", the company employed 150 workers at the start of the Russian Revolution of 1917. Is an acronym from the Hebrew expression Morenu Rabbi Shmuel Kaidanover, after the Kabbalah rabbi Aaron Samuel Kaidanover. At the end of the nineteenth century, Russia was prosperous, and orders for fine jewelry were flowing in apace. In 1890, Joseph Marchak set out on a journey to France; in many ways, Russia had a great influence on France. For example, six years later, in 1896, Tsar Nicolas II would lay the first stone of the most elegant bridge of Paris, the Pont Alexandre III.

Joseph traveled a lot, and he took part in many exhibitions in Moscow and St. By 1893, Joseph's reputation had traveled across the Atlantic. He was awarded a medal at the World's Fair in Chicago held in 1893 and in Antwerp in 1894.

Every time he came back from one of his trips, he developed and improved the techniques he had discovered abroad. Courageous and persevering, he rebuilt his workshops, which had been devastated by a fire in 1899. He made the most of this misfortune by enlarging and modernizing the premises, and employing innovating laborers who shared his zeal.

To commemorate the anniversary, Tsar Nicolas II came to Kiev and was presented with official gifts especially made by Marchak. These were the glory days for the House of Marchak. It was not long before Joseph Marchak was called "The Cartier of Kiev", the outright rival of the famed Fabergé.

Meanwhile, Alexander Marchak, the youngest son of Joseph, born in 1890, was studying law and attending some classes at the Ecole des Beaux Arts and Art Deco in Paris. However, the outbreak of World War I compelled him to go back to Russia. When he arrived in Kiev, Alexander was required to fulfill the mandatory service requirement in the Russian Army. He was sent to the Austrian front, where he performed airborne reconnaissance photography which later proved to be of significant importance to war techniques. Joseph Marchak died prematurely from cancer at the age of 64.

As a great number of Russians were also leaving their country in haste to join Europe, the Marchak family also fled, concealing the last remnants of their jewelry creations under their clothes. Upon their arrival in Paris, they were greeted by Joachim, one of Joseph's five sons, who had already settled as a physician in a Paris hospital. Within a little more than twenty years, Joseph Marchak had become the most important j. This item is in the category "Antiques\Silver\Solid Silver\Other Solid Silver".