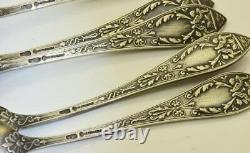 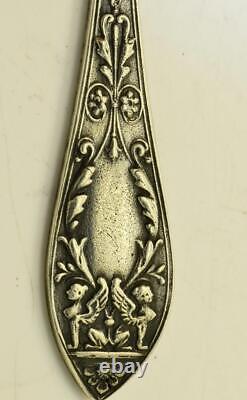 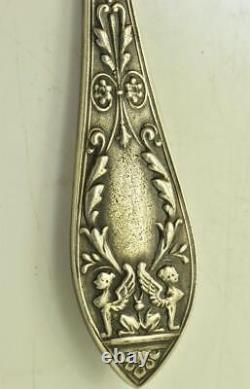 Antique Imperial Russian 6 Silver Spoons Grachev's Brothers Set-Boxed c1908. This product data sheet is originally written in English. Antique Imperial Russian Grachev's brothers 6 silver spoons set in box c1908. Made by the most famous Imperial Russian silver smith workshop of Grachev Brothers-the official vendors of the Imperial Court(read the history below) Signed with 84 silver hallmark;Grachev Brothers name and the Imperial Warant eagle, which means that the master is an official supplier to the Imperial Court. Each spoon is chased in the clasical Russian Empire style with grifins. Excellent condition with the original dark patina. Factory of brothers Grachevs Br. The gold, silver and electroplating products factory was founded in St. Petersburg in 1866 by silversmith Gavriil Petrovich Grachev, who had previously worked for Gasse. After his death in 1873, the business was continued by his sons Mikhail, Simon and Grigory, who renamed the enterprise into Br.

Until 1889 - the year of the workshop opening - the firm did not have its own brand. In 1892, the firm was awarded the title of court vendors of the Imperial Russian Imperial Court, reaffirmed in 1901.

In 1895 the factory was opened, in 1900 the Trade House was organized. The company ceased operations on March 2, 1918. The works of the Grachev brothers' factory were awarded at the All-Russian Industrial and Art Exhibition in 1896 in Nizhny Novgorod, as well as at exhibitions in Copenhagen (1888) and Chicago (1893).

Despite the fact that the Grachev brothers' factory became famous in St. Petersburg as an enterprise for creating objects in the "Russian" style, the masters also worked in the style of historicism.

They performed in a variety of jewelry techniques, including enamel. This item is in the category "Antiques\Silver\Solid Silver\Other Solid Silver". The seller is "riaerica2000" and is located in this country: BG. This item can be shipped worldwide.