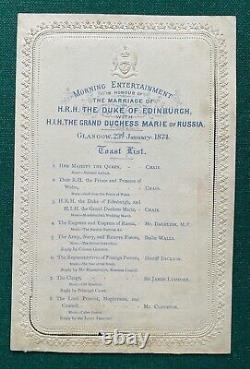 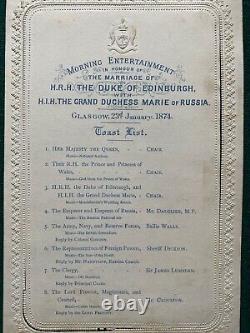 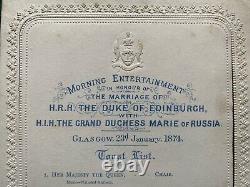 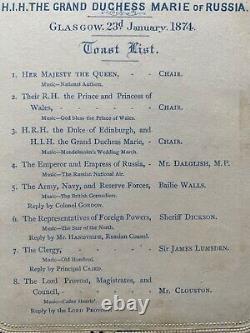 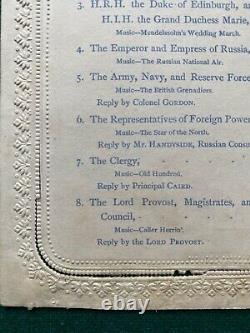 We work very hard to offer the highest quality works at competitive prices. Our inventory is listed online, and we strive to keep our website completely up to date, so our customers can easily check availability. We believe in offering clients items that are unique and rare for aficionados of the antique and collector's world. Bibelot is a late nineteenth century word derived from the French word bel'beautiful', meaning a small item of beauty, curiosity or interest.

The word ephemera is derived from the sixteenth century Greek word ephmera meaning a printed or hand written paper not meant to be retained for a long period of time. Fine antique embossed invitation to attend the Morning Entertainment in Glasgow in honour of the forthcoming marriage of Prince Alfred, Duke of Edinburgh to Grand Duchess Marie Alexandrovna of Russia, dated 23rd January 1874. The Duchess often squabbled with her mother-in-law on how she should be addressed at court. As the Tsar's only daughter, Maria Alexandrovna had precedence over all the Grand Duchesses in Russia. She therefore deeply resented having to give precedence in England to the Princess of Wales.

From her birth, Maria Alexandrovna was an Imperial Highness as the daughter of an Emperor. However, once she married her husband she was only entitled to the style of Royal Highness. Tsar Alexander II alleged that his daughter should continue to be styled as an Imperial Highness, not royal, "as in all civilised countries". Queen Victoria replied that she did not care whether imperial was used or not, as long as royal came first. There was also the added problem that Maria was both Duchess of Edinburgh and Grand Duchess of Russia, and which title should be written first was a controversial matter.

In retaliation for the quarrel over precedence, the Duchess of Edinburgh took great pleasure in showing off her magnificent jewellery. The English princesses were clearly jealous of her diamonds, as was Queen Victoria.

At the outbreak of World War I, Maria Alexandrovna was in Coburg after returning from a visit to King George V in Buckingham Palace. Her sympathies were divided, but she sided with Germany against her native Russia. The Coburg family faced intense hostility during the war for their British and Russian connections. Her position in Coburg became untenable as Russophobia took over the German Empire. To avoid complications, Maria Alexandrovna stayed away from Coburg retiring to Tegernsee in Bavaria.

At one point, while she was returning home with her two younger daughters, their car was stopped by an angry mob who recognised her and harassed her for her Russian heritage. It took the police over an hour to extricate them from the situation. After that incident Maria Alexandrovna went to live in exile in Switzerland. Sometimes I also seem to despair, but not about myself, but about the state of things in general. Many of the Grand Duchess' relatives were killed during the Russian revolution, including her only surviving brother Grand Duke Paul and her nephew Tsar Nicholas II with his immediate family.

In the aftermath of the war, the Dowager Duchess lost her large fortune as the bulk of it was held in trust in Russia. Her British income was small, and as she never saw a penny of it, she was forced to sell a great part of her jewellery collection. Living under reduced circumstances in Zürich, Maria Alexandrovna was reunited with her two eldest daughters Marie, Queen of Romania, and Victoria Melita, Grand Duchess of Russia who had been on the opposite side during the war. They have destroyed and ruined my beloved Russia, my much-loved Germany.

She was a broken woman, her figure, always plump, became thin and her hands trembling. Although she had been affected by gastric troubles, her death came unexpectedly. Eight days after her sixty-seventh birthday, on 25 October 1920, the only child of Tsar Alexander II to survive the Russian Revolution died in her sleep of a heart attack. She was buried in the ducal mausoleum at Friedhof in Coburg beside her husband and their son. "She was profoundly religious, " her eldest daughter wrote, I hope God will not disappoint her as most things and beings did in this life.

Prince Alfred was the second son and fourth child of Queen Victoria and Prince Albert. He was known as the Duke of Edinburgh from 1866 until he succeeded his paternal uncle Ernest II.

As the reigning Duke of Saxe-Coburg and Gotha in the German Empire. Alfred and Maria's only son, also called Alfred became involved in a scandal involving his mistress and apparently shot himself in January 1899, in the midst of his parents' twenty-fifth wedding anniversary celebrations in Gotha.

He survived, but his embarrassed mother sent him off to Meran to recover, where he died two weeks later, on 6 February. The Duke of Saxe-Coburg died of throat cancer on 30 July 1900 in a lodge adjacent to the ducal summer residence just north of Coburg. He was buried at the ducal family's mausoleum in Coburg. He was survived by his mother, Queen Victoria, who had already outlived two of her children, Alice and Leopold. She died six months later.

Size: 19.5 x 12.5 cm approx. Photos form part of the description. This item is in the category "Collectables\Historical Memorabilia\Royalty Collectables". The seller is "bibelotslondon" and is located in this country: GB.