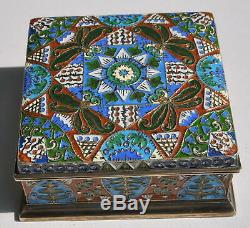 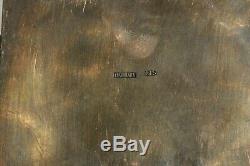 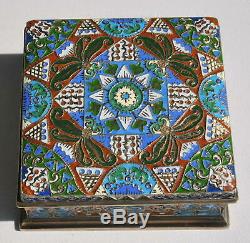 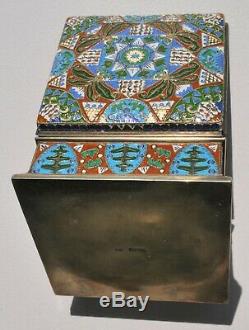 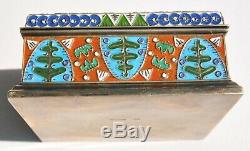 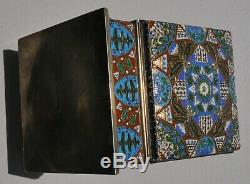 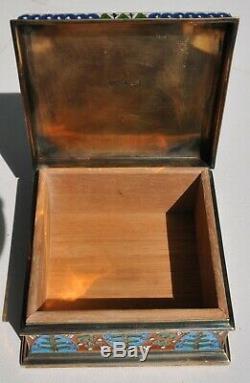 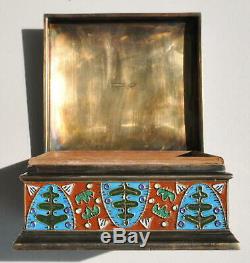 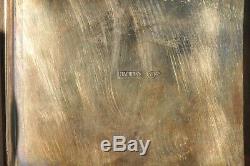 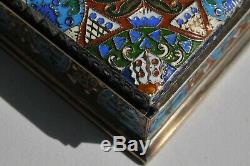 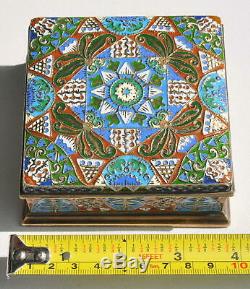 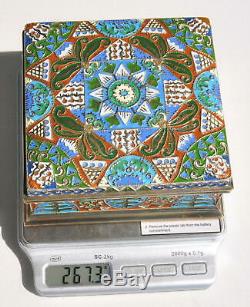 Silver-Wood Cigarette Humidor Box, goldsmith jewelry workshop Marchak. The subject of high royal jewelry Art - artefact, with the Russian factory mint mark. Made from the Russian solid silver 84. The item is in good condition for its age, only there is a small chip of red enamel in the corner on the top of the box, see photos. Generally, all other parts of the product are in good condition, the box is no longer repaired.

Imperial typical silver jewelry manufacturing product with beautiful multicolor colored enamel from the Royal Imperial Russia Wood Cigarette Humidor Box , goldsmith jewelry workshop Marchak, (Russia:). Bottom part with Cyrillic maker's mark and hallmarks Marchak the inner cover has the same stamp. Antique box produced solid silver, bottom sides are hallmarked with Russian Imperial Silver 84 and covered with colored enamel. Inside of the Silver box is interior by cider wooden insert, outside parts of the box decorated by a colored enamel incredible decoration. Typical small scratches as expected on silver of this age. The exterior has a finely detailed engraved image of the oriental ornament. Stamped with the Russian Hallmarks 84. The enamel is essentially perfect, no wear of any kind visible to the unaided eye. The enamel retains beautiful luster throughout.

The best indication of condition is to study the photographs carefully. A fine colored enamel box to add to your collection. For sale is a beautiful Antique Imperial Russian royal jeweler. Silver - Wood Cigarette Humidor Box, goldsmith jewelry workshop Marchak.

Life history of jewelry magnate from Russian Imperial and Paris, USA. In his time, Joseph Marchak was considered by the people to be in the same league as the famous Russian goldsmiths Sazikov and Khlebnikov. One could come across his name as frequently as the famous brands Faberge and Bolin in the reports about the Nizhny Novgorod Fair of Art and Industry of 1896.

Today, jewelry historians state that the works by Marchak embodied the best features of the art of jewelry in the borderline period of the late 19th and early 20th centuries. The items created by the master were distinguished by their professionalism, artistic taste, humor, originality, and superb workmanship. While the House of Marchak created an array of masterpieces, most of them did not survive the storm of revolutions, wars and historical cataclysms and were lost forever. Josif (Joseph) Abramovich Marchak was born in 1854.

From childhood he demonstrated artistic talent and while apprenticing at a jewelers atelier, at the age of 14, he dreamed about starting his own business. In 1878, ten years after starting his apprenticeship, he launched his own business in a poor Kiev neighborhood making gold chains and other items. He later settled in a five-room flat at 4 Kreschatyk, Kievs main street, and later moved production to Russia.

In his work, he strove for perfection, using only the best materials: gold from Hamburg, Berlin, and Paris, silver from Moscow and platinum from St. He started close business relationships with foreign goldsmiths and hired the best artists from St. Petersburg and Paris to work on the design of his items. In 1893, Joseph's reputation crossed the Atlantic. By this time Joseph Marchak was supplying 38 jewelry stores and up-market workshops as well as managing production for his own boutique.

It was not long until he was called The Cartier of Kiev and became the outright rival of the famed Fabergé. The year 1913 marked the 300th anniversary of the Romanov Dynasty.

To commemorate it the State commissioned special pieces by Marchak to be given to Tsar Nicolas II as gifts. These were the great days for the jeweler's reputation. The Marchak family relocated to Paris, concealing the last remnants of their jewelry creations under their clothes. In 1922 Alexander Marchak launched a collaboration with Robert Linzeler. Their names have become linked with some of the greatest jewels of the Art Deco period.

The Marchaks spent the war in Savoy while the Paris shop was looked after by a manager. After WWII ended, Alexander Marchak hired designer Alexander Diringer, long-known by the jewelry community of the Rue de la Paix and a former employee of Cartier. He remained designer of the House of Marchak until the end of the sixties.

The post-war period was particularly artistically rich for Marchak. In 1946 Jacques Verger, the son of a prominent jewelry family and exceptionally passionate salesman, was hired. Verger was very well connected and experienced, having previously worked at Ostertags and Sterlé. He became head of the company and, with his financial partner, André Delanglade, bought out Marchaks shares. A year later the Marchak firm, lead by Verger, started expanding, taking its jewelry overseas to the United States.

Despite the passing of family ownership, the Marchak spirit lived on thanks to the hearty collaboration of Jacques Verger and his employees. In 2000, one of the only heirs of Alexander Marchak to bear the Marchak name decided to revive the brand of his great-grandfather by creating a new collection. The collection has traveled around the world, in Saint Petersburg, Moscow, the United States, Japan and Australia. THERE ARE NO COMPLICATED "TERMS & CONDITIONS"...