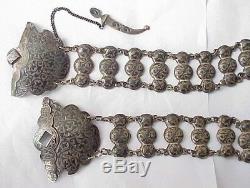 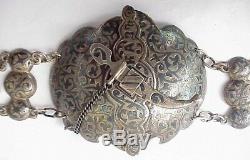 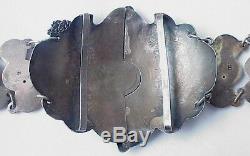 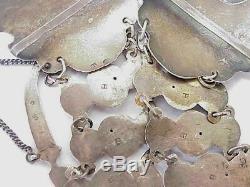 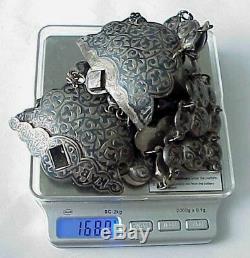 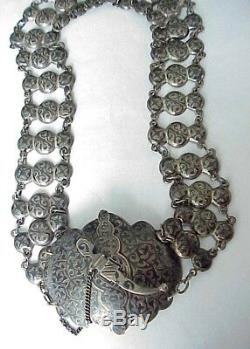 & with the factory mint mark of Royal Imperial Russia. Workshop of Factory (Jeweler fabric). Belongs to its place of occurrence - the Dagestan mountain village of Kubachi.

Typical silver and niello linked women's belts from the Caucasus, each with kindjal clasp buckle and each with Cyrillic maker's mark and hallmarks, the greatest length of the 27.5 inches (70 cm), and a small silver and niello shield shaped ring. The clasp is working perfectly, the exterior has a finely detailed engraved image of the oriental ornament. Stamped with the Russian Hallmarks. The enamel Niello Cheroot is essentially perfect, no wear of any kind visible to the unaided eye. The enamel retains beautiful luster throughout. The best indication of condition is to study the photographs carefully. A fine set to add to your collection. The name of the craft itself, Kubachi.

(The Republic of Dagestan is the southern part of Russia; it is situated in the Caucasus and borders on Georgia and Azerbaijan). 19th century Enamel Niello Cheroot. Typical Russian Cossack or Caucasian ornament in Niello decorative art work.

The cover dipicting the Niello Cheroot belt. Outside side decorated with a niello enamel decoration. The clasp is strong, clicks when shut. Minor wear on the corners. Both sides are hallmarked with Russian Silver Sterling 84, Moscow, mark for year 1869.

Maker's mark in Cyrillic. Belongs to its place of occurrence - the Dagestan mountain village of Kubachi, town mark for Moskow.

History of village Kubachi, art jewelry world by Dagestan. Kubachi is urban-type settlement in the republic of Dagestan, which is situated on the southern border of Russia, in the Caucasus Mountains.

Kubachi is mentioned in the IV century of annals. In ancient times, the Greeks developed the mines in the Caucasus, mined precious metals, including silver, and here were engaged in jewelry manufacturing.

Kubachi artisans have created the sword for Russian Prince Mstislav, and the shield for Alexander Nevsky. There are works of mountain village Kubachi jewelers in several world museums. For example, there is the knives collection, once belonged to Queen Victoria in London's Victoria and Albert Museum She got it as a gift from Alexander III, specially ordered collection from Kubachi masters for the occasion. Silver handicrafts are considered a sign of good taste at all times. Kubachi silverware impresses with its luxury and originality.

Will rightly take the main place in the collection of your family jewels and become a worthy Russian present for your beloved ones. Pictures are part of Description. RUSSIAN IMPERIAL 84 SILVER ENAMEL BELT ROYAL ANTIQUE ART KUBACHI STERLING" is in sale since Monday, May 28, 2018. This item is in the category "Antiques\Silver\Non-U.

The seller is "rima83" and is located in North Miami Beach, Florida. This item can be shipped worldwide.
grandfabergepocketbroochsilverenamelrarerussiaspoonimperialcasenicholassignedplategiltdiamondsterlingantiquediamondsgoldporcelainsolidroyalrussianwatchcigarettephotoromanoviconpendantmoscowjewelrycrossringtsar